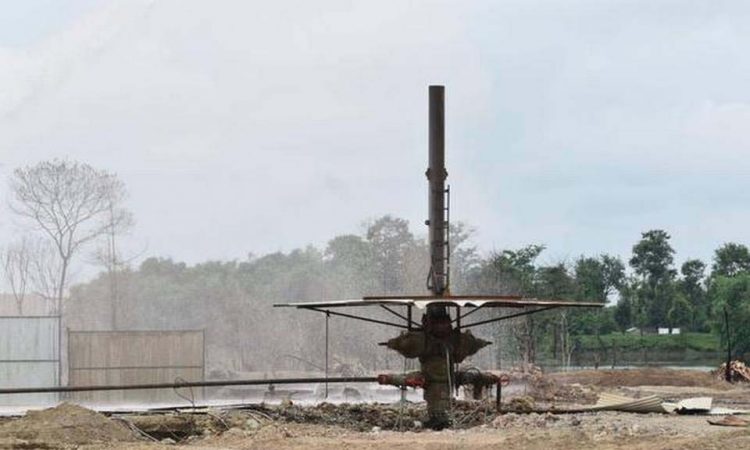 Guwahati/Tinsukia, November 15: In a multi-agency effort, the damaged gas well at Baghjan in Assam was successfully ‘killed’ and the blaze was fully doused on Sunday after over five months of a blowout, Oil India said.

The worst industrial disaster of the Northeast took away the lives of three employees of the PSU major and injured several others.
The process to control the well by joint efforts of multiple teams, including foreign experts, also faced a series of setbacks.
“The well has been killed with brine solution and under control now. Fire has been doused completely,” Oil India Ltd (OIL) spokesperson Tridiv Hazarika said in a statement.
There is no pressure in the well now and it will be under observation over the next 24 hours to check if there is any amount of gas migration and pressure build-up, he added.
“Further operation to abandon the well is in progress,” Hazarika said, adding that experts from Singaporean firm Alert Disaster Control were actively engaged in the final operation to control the well.
Senior officials from the company said Alert Disaster Control’s snubbing unit from Canada reached the site last month and the success could be achieved in an effort by experts from the global firm, OIL and ONGC.
The company’s Director (Exploration and Development) P Chandrasekaran, Director (Operations) PK Goswami and Resident Chief Executive DK Das visited the well site following the successful killing operation after 172 days of the blowout and held detailed discussions with the experts from Alert.
The well no 5 at Baghjan in the Tinsukia district was spewing gas uncontrollably for 173 days since May 27 and it caught fire on June 9, killing two of OIL’s firefighters at the site.
On September 9, a 25-year old electrical engineer of the OIL lost his life due to high voltage electric shock when he was working at the well site.
On July 22, three foreign experts from the Alert Disaster Control, which was assisting OIL and ONGC experts in putting out the inferno, received burn injuries while they were removing a spool from the wellhead.
The company achieved the success of killing the well much ahead of its plans as announced by OIL Chairman and MD Sushil Chandra Mishra on September 29, when he had said two more months were likely to be taken.
On August 17, OIL had achieved the first successful step towards dousing the blaze when it could place the Blow Out Preventer (BOP), which is a very heavy metal cover weighing several tonnes, in its third attempt at the mouth of the gas well.
The fire at the wellhead was doused after the company successfully diverted the gas on September 13 through pipes fitted from the BOP.
The inferno had brought everything in a diameter of about one kilometre around the well into ashes. Several houses were totally damaged, while environmentalists claimed “huge” damage to the biodiversity of the adjacent Maguri-Motapung wetland.
Regarding compensation to the people near the Baghjan well, Mishra said the company had deposited the money estimated by the Tinsukia district administration and the National Green Tribunal after surveying 2,756 families.
He had also said that various assessments and impact studies of the blowout as well as the blaze in villages and nearby forest areas by multiple agencies such as ERM India, TERI, CSIR-NEIST and IIT-Guwahati were carried out and “no major damage to the ecology” was found.
In the last week of September, Mishra had said that the total gas loss stood at 80,000 standard cubic meters and the loss due to the damaged well was Rs 6 crore, while forced closures and blockades by locals cost OIL Rs 179 crore.
The company had also lost production of 84,000 metric tonnes of crude oil due to protests after the blowout took place on May 27 and 22 wells were shut down by agitators in the Baghjan area at one point of time.
The OIL official had also said that it took actions against those employees, for whom this mishap took place.
Within days of the blowout, two officials of the OIL were suspended for alleged negligence of duty at the gas well site, while a show-cause notice was served on Gujarat-based outsourced private well operator John Energy.
Many senior employees of OIL and experts, as well as veterans of the company and ONGC, had said earlier that several standard operating procedures (SOPs) were violated at the well.
At least five inquiries were initiated to find out the facts — one three-member probe by the Ministry of Petroleum and Natural Gas, a one-member probe by Assam Chief Minister and an internal five-member inquiry by the OIL.
Besides, two more crucial independent investigations of technical nature were carried out by the Directorate General Of Mines Safety (DGMS) and the Oil Industry Safety Directorate (OISD). (PTI