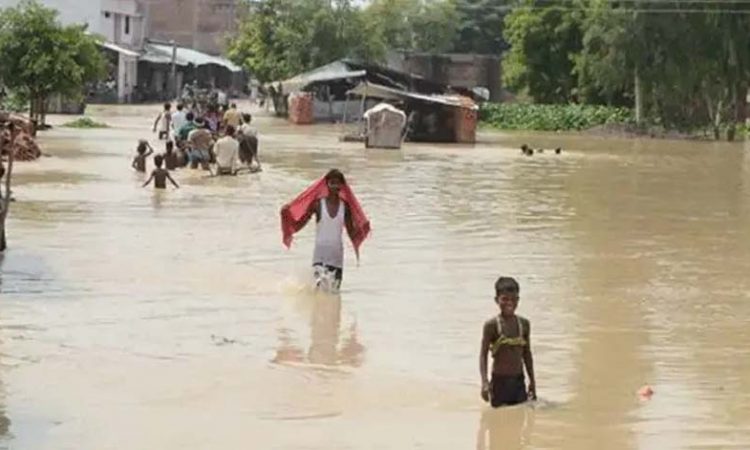 Guwahati, September 5: The flood situation in Assam improved on Sunday with the number of people affected by the deluge coming down to over 1.18 lakh and no new fatality reported, a bulletin said.
According to the daily flood report of the Assam State Disaster Management Authority (ASDMA), at least 1,18,300 people are suffering from the deluge in Barpeta, Chirang, Darrang, Dhemaji, Goalpara, Golaghat, Morigaon and Nagaon districts.

Golaghat is the worst-hit district with around 48,300 people affected, followed by Darrang and Morigaon.
Till Saturday, nearly 1.77 lakh people were hit by the deluge across 12 districts of the state.
The total number of persons losing their lives in this year’s flood stands at seven, the bulletin said.
Four more persons have drowned, but the ASDMA said these were cases of “general drowning” and not included in the flood toll.
At present, 646 villages are underwater and about 19,659 hectares of crop areas have been damaged across Assam, the bulletin said.
Authorities are running 24 relief camps and distribution centres in nine districts, where 2,333 people, including 439 children, have taken shelter.
The administrations have distributed 10.65 quintals of rice, dal and salt, 11.25 litres of mustard oil, 419.25 quintals of cattle feed and other flood relief items during the day.
Massive erosion was witnessed in Barpeta, Biswanath, Bongaigaon, Dhubri, Kokrajhar, Morigaon and Sonitpur districts, the bulletin said.
Roads, bridges and other infrastructure have been damaged by floodwaters in Dhubri, Goalpara, Kamrup, Nagaon, Sonitpur, Golaghat and Udalguri, the ASDMA said.

At least 2,01,578 domestic animals and poultry have been affected by the deluge across eight districts, it added.
Meanwhile, the Kaziranga National Park and Tiger Reserve in its flood report said 35 per cent of the forest area is still under floodwaters. Of the 223 camps, 32 are affected.
Due to the flood and related incidents, 14 hog deer, two swamp deer, and three other animals have died so far, while four have been rescued till now, it added. (PTI)