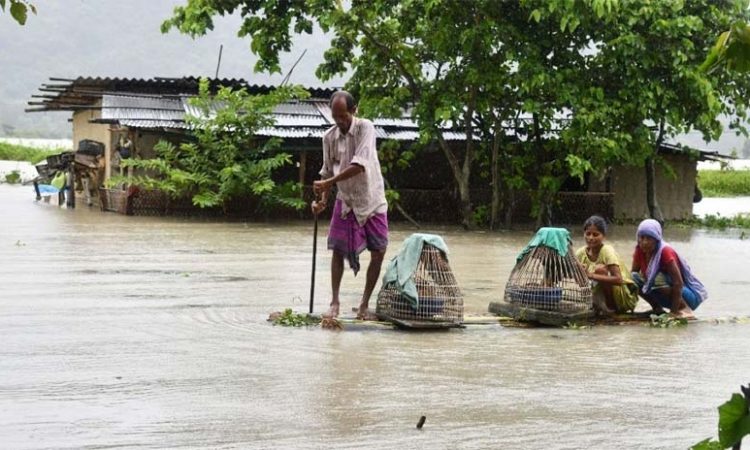 Guwahati, September 2: The flood situation in Assam improved marginally as the number of people affected by the deluge came down by nearly 1.55 lakh, though two more children died on Thursday, a bulletin said.
The number of people reeling under the natural calamity now is about 4.93 lakh while it was 6.48 lakh on Wednesday, it said.

According to the daily flood report of the Assam State Disaster Management Authority (ASDMA), one child each drowned in Chamaria of Kamrup and Mayong of Morigaon, taking the toll in the floods to five.
Two more persons have drowned, but the ASDMA said these were cases of “general drowning” and did not include them in the flood toll.
At present, 1,230 villages are submerged and 39,606.03 hectares of crop area have been damaged, the bulletin said.
ASDMA said more than 4,92,800 people are affected due to floods in 18 districts — Barpeta, Bongaigaon, Chirang, Darrang, Dhemaji, Dhubri, Goalpara, Golaghat, Jorhat, Kamrup, Kamrup Metropolitan, Lakhimpur, Majuli, Morigaon, Nagaon, Nalbari, Sivasagar, and Sonitpur districts.
The bulletin said Nalbari is the worst-hit district affecting nearly 1.11 lakh people, followed by Golaghat ( 91,500) and Darrang (84,100).
Till Wednesday, 17 districts were affected by the deluge.
It further said authorities are running 105 relief camps and distribution centres in 12 districts, where 4,169 people, including 935 children, are taking shelter.
The bulletin said that various relief agencies have evacuated 911 persons from several flood-hit parts of the state.
Massive erosions have been witnessed in Barpeta, Biswanath, Bongaigaon, Chirang, Dhubri, Dibrugarh, Morigaon, Sonitpur, and Udalguri districts, the bulletin said.
Roads, bridges, and other infrastructure have been damaged by floodwaters in Cachar, Chirang, Darrang, Dhemaji, Goalpara, Golaghat, Lakhimpur, Nagaon, Darrang, Barpeta, Jorhat, and Morigaon, ASDMA said.
A total of 5,42,667 domestic animals and poultry have been affected by the deluge across 19 districts, it added.
Meanwhile, the Kaziranga National Park and Tiger Reserve authorities said 70 per cent area of the forest is still under water.
As many as 110 camps of the 223 anti-poaching camps are inundated.
Due to flood-related incidents, nine hog deer, two swamp deers one each cap langur and python have died so far, while three animals have been rescued till now.