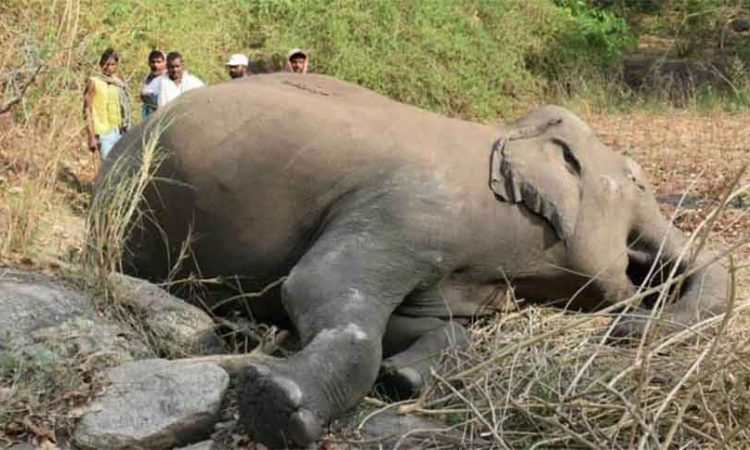 GUWAHATI, MAY 15: Initial findings of the post mortem on 18 elephants that died on a hilltop in Assam’s Nagain district on Wednesday night indicate that it was a lightning strike that killed them. However, the final report is awaited as samples have been sent to laboratories for further microbiological and toxicological examination to “completely rule out other causes”, authorities said. “This freak natural incident is also being corroborated based on meteorological reports” said an official press release by the Government.

On the night of May 12, 18 elephants died in the Bamuni hillock in the Kundoli Proposed Reserve Forest, under the Kathiatoli range, situated close to the border of Nagaon and Karbi Anglong districts
On Friday, the elephants were buried in the same spot as per customary last rites. “14 were buried on Friday afternoon and 4 more will be buried on Saturday,” said Vasanthan B, DFO, Nagaon, “They were buried with flowers and locals came to pay their last respects.”
Following Chief Minister Himanta Biswa Sarma’s orders for an inquiry, a 7-member committee, headed by the Deputy Conservator of Forest, KK Deori, arrived at the site on Friday to conduct the post mortem. The team is to submit a preliminary report within 3 days and a detailed investigation report within 15 days.
According to members of the veterinary team which conducted the post-mortem, circumstantial evidence points towards lightning as the cause for deaths. These include location and topography of the area, orientation of the carcasses, and singeing marks on a few elephants.
“The hill is a steep climb, located at 210 MSL,” said one of the team members, “We found a number of burnt trees, split down in the middle indicating that the area was struck by lightning.” Moreover, some of the elephants had burnt ears, charred bellies, and burn marks on the scapular region.
All the bodies ~ 10 females and 8 males including calves ~ were found within a radius of 100 to 150 metres. “While 14 were found on the hilltop, 4 slipped about 50 metres, caught by large boulders and other obstacles on the path,” the member said.
The samples have been sent to the Regional Forensic Science Laboratory, College of Veterinary Science in Guwahati as well as to the Northeast Disease Diagnosis Laboratory for further investigation. “As per protocol, we need to rule out other probable causes ~ including poisoning and disease,” he said.
While this is the first such incident in which 18 elephants have been struck by lightning at a go, such deaths have been reported earlier ~ in 2007, five elephants were killed in a similar incident in Buxa Tiger Reserve in West Bengal. “Other incidents have been reported in Kerala in 2004, as well as in Sri Lanka and Thailand,” said Guwahati-based elephant expert and conservationist Dr Bibhuti Lakhar, adding: “Usually in storms and rains, elephants tend to huddle together. Considering they were on a ridge, it is possible that they were trying to make their way to plain ground during the storm on Wednesday. Sometimes they stick to trees for shelter as well.”
The Bamuni hill, where the incident occurred, does not have thick vegetation. “It is quite barren, and without a single tall tree to take the brunt of the lightning,” said the committee member. He added that apart from direct strike, there are other ways lightning can kill: side flash, where current bounces off a bigger object and affects those close by, or ground current, where the current flows along the ground surface and affects even those who are outside the area of the strike. Considering the animals were scattered, this is possibly what happened on the night of May 12.
Dr Lahkar said that the entire episode also points to the rapid destruction of elephant habitat in Assam. “There were not many trees in the hill ? possibly because of logging,” he said, “Most of these areas, even if they are reserved forests or proposed reserved forests, receive less attention. They might be paths that elephants and other animals frequent, but the lack of legal status identifying them as elephant corridors leads to less protection.”

Environmental activists in Assam have pointed out that the site where the animals have died is close (less than 1 km aerially) to the Mikir Bamuni cluster of villages, a disputed site where, since mid-2020, resident locals of the Adivasi and Karbi communities have been protesting the move of a private company to build a 16 MW solar power plant on 276 bighas of their land.
Recently a Fact Finding Committee of Delhi Solidarity Group that works on social justice and social movements visited the Mikir Bamuni grant site and said that the area was part of an elephant corridor. “Elephants crossed through the village, their passage was blocked by the solar plant, and thus this constitutes an active elephant corridor and ecologically sensitive region” the report said. (Courtesy: IE)