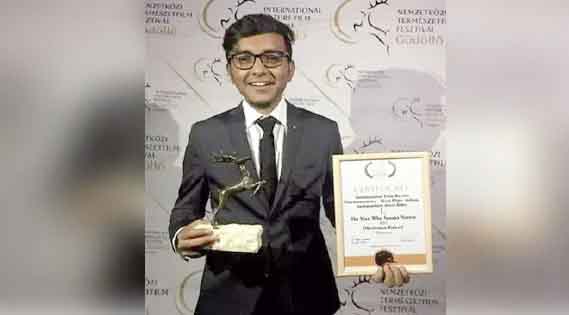 Dhritiman Kakoty of Assam has made the entire Northeast proud by bagging the ‘Best Film’ award at the 5th International Nature Film Festival Gödöllo. His documentary-short ‘The Man Who ‘Speaks’ Nature’ bagged the ‘Best Film’ award at the international film fest.
The summary of the movie in the Internet Movie Database (IMDB) reads as follows: “It is a short documentary film providing a glimpse into the life and work of Manoj Gogoi, a conservationist based in Kaziranga who has dedicated his life towards the rescue and rehabilitation of snakes and birds in particular. The documentary attempts to seek the reasons behind his plunge into conservation work and exhibits a peek into the daily work schedule of Gogoi that comes with being a self-styled naturalist known to have rescued and rehabilitated over 4000 species of flora and fauna. As Gogoi dwells on the reasons that motivated his work and how it has affected his personal life in the documentary, the film is an effort, therefore, towards showcasing, delicately, the elaborate view of the intersection of the personal and the professional space of the determined naturalist.
Kakoty is both the Director as well as Writer of the short film, which runs for 8 minutes and thirty-two seconds. He hails from Bokakhat town in Golaghat district in Assam. The editing work has been done by Raktim Hazarika.
The nature film festival is being held from May 23 to May 27 at Godollo, a town located about 30 kilometres from Budapest, the capital city of Hungary.
The mission of the festival is “to raise the awareness of the general public regarding the protection and conservation of biological diversity, natural resources, values and beauties of the world with a special emphasis on Europe and the Carpathian Basin through the display of films connected to the topic,” according to the event’s official website.
It may be mentioned that this year’s main topic is ‘water’.