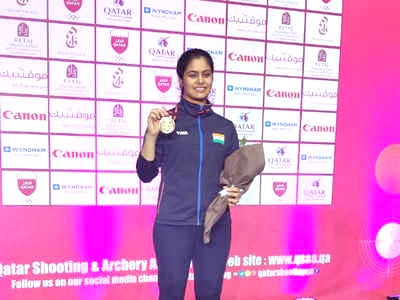 DOHA, November 5: Manu Bhaker claimed the women’s 10m air pistol gold medal in the 14th Asian Championship on Tuesday, while birthday boy Deepak Kumar secured India’s 10th Olympic quota in shooting.
The 17-year-old Bhaker shot 244.3 to win the top prize in her event. The Haryana sensation, though, had already secured an Olympic quota at the Munich World Cup in May.
China’s Qian wang and Ranxin Jiang won the silver and bronze respectively in Bhaker’s event.
The other Indian competing in the event, Yashaswini Singh Deshwal finished sixth in the final.
The third Indian in the fray, Annu Raj Singh shot 569 for a 20th place finish.
The Indian trio claimed the team bronze with a total of 1731, behind Korea and China respectively.
Deepak gifted himself a bronze medal in the 10m air rifle on the opening day of the championship.
The Jakarta Asian Games silver medallist shot 227.8 in the eight-man final to finish third on the podium and add to India’s quotas for the 2020 Tokyo Olympics.
Deepak, who turned 32 on Tuesday, qualified for the final in third place at the Lusail Shooting Complex after registering a sequence of scores that read 103.1, 104.8, 104.6, 105.0, 105.6, 103.7, giving him an aggregate of 626.8.
The rifleman, who won a bronze medal at the 2018 ISSF World Cup in Guadalajara last year, started the final with a 8.9, but roared back with nine straight scores of 10 and above to sit in third place after the first competition stage.
He continued to shoot well in the ensuing attempts and gifted himself a medal and his country a quota on the opening day of the prestigious tournament.
Deepak is the second Indian shooter to earn an Olympic quota in the men’s 10m air rifle event after Divyansh Singh Panwar, who secured it in April.
In the women’s 10m Air Rifle, the Indian trio of Elavenil Valarivan, Anjum Moudgil and Apurvi Chandela won the team silver with a combined effort of 1883.2, finishing behind Korea (1891.7). Iran won the bronze.
Elavenil also made it through to the individual final, placing fifth eventually with a score of 187.1. She had earlier shot a solid 629 in qualification to make it to the finals in fourth place.
Anjum Moudgil missed making the finals narrowly, finishing ninth with a score of 627.6 while Apurvi Chandela finished 12th with 626.6. (PTI)