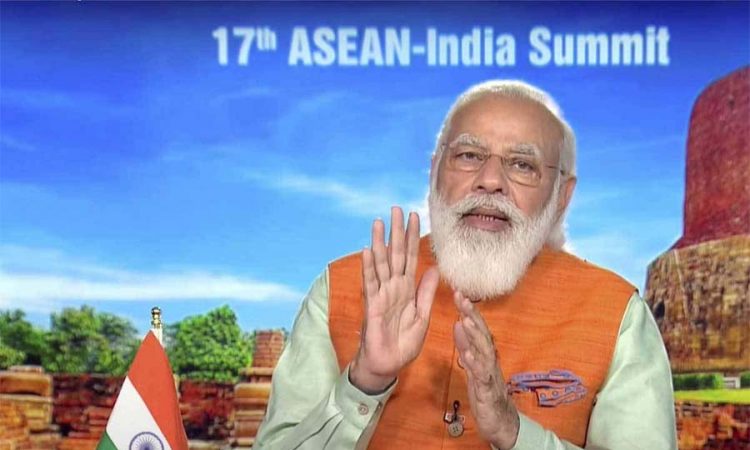 New Delhi, November 12: Prime Minister Narendra Modi on Thursday pitched for convergence of approach between India and the 10-nation ASEAN in ensuring a free, open, inclusive and rules-based Indo-Pacific, a region that has witnessed renewed global focus in view of China’s expansionist behaviour.

At a virtual summit, India and the ASEAN also deliberated on the situation in the South China Sea and affirmed the importance of maintaining and promoting peace, stability, safety and security in the region besides ensuring freedom of navigation and overflight, the Ministry of External Affairs (MEA) said.
The summit also welcomed the adoption of a new ASEAN-India Plan of Action for 2021-2025 to boost overall cooperation in various areas.
In the summit, Prime Minister Modi announced a contribution of USD 1 million to COVID-19 ASEAN Response Fund and stressed on leveraging strong ties between the two sides in the battle against the pandemic.
In the previous ASEAN-India summit in Bangkok last year, Modi had proposed a new framework called ‘Indo-Pacific Ocean’s Initiative’ to create a safe and secure maritime domain in the Indo-Pacific, indicating India’s readiness to play a bigger role in the region.
In his address, Modi also underscored the importance of greater physical and digital connectivity between ASEAN and India and re-iterated India’s offer of USD 1 billion Line of Credit to support ASEAN connectivity, Secretary (East) in the MEA Riva Ganguly Das said at an online media briefing about the summit.
The summit took place amid China’s aggressive behaviour in the disputed South China Sea, Indo-Pacific region as well as in eastern Ladakh. A number of ASEAN countries have territorial disputes with China in the South China Sea.
The secretary said the discussions also covered regional and international issues of common interest and concern including South China Sea and terrorism.
“Both sides noted the importance of promoting a rules-based order in the region including through upholding adherence to international law, especially the UNCLOS (United Nations Convention on the Law of the Sea).
“The leaders affirmed the importance of maintaining and promoting peace, stability, safety and security in the South China Sea in particular freedom of navigation and overflight,” she said.
“There is ample closeness between India’s ‘Indo Pacific Oceans Initiative’ and ASEAN’s ‘Outlook on Indo Pacific’. We firmly believe that a cohesive and responsive ASEAN is essential for security and growth for all in the region,” Modi said in his opening remarks.
“Speeding up all types of connectivity initiatives between India and ASEAN – physical, economic, social, digital, financial, maritime – is the top priority for us.
We have come very close in all these areas in the last few years,” he said.
The Association of Southeast Asian Nations (ASEAN) is considered one of the most influential groupings in the region, and India and several other countries including the US, China, Japan and Australia are its dialogue partners.
The ties between India and ASEAN have been on an upswing in the last few years with focus being on ramping up cooperation in the areas of trade and investment as well as security and defence.
In his address, Modi said the ASEAN Group is the core of India’s Act East Policy since the very beginning.
Ganguly Das said Modi noted that a cohesive, responsive and prosperous ASEAN is central to India’s Indo-Pacific Vision and contributes to ‘Security And Growth for All in the Region (SAGAR)’.

“The Prime Minister underscored the importance of strengthening convergence between India’s Indo-Pacific Oceans Initiative and ASEAN Outlook on Indo-Pacific to ensure a free, open, inclusive and rules-based Indo-Pacific region. He invited the ASEAN countries to take the lead on various pillars of our Oceans Initiative,” she said.
On trade and investment, she said the review of ASEAN-India trade in goods agreement has been long pending and added that Modi called for an early review of the pact.
Ganguly Das said the Prime Minister underlined the importance of diversification and resilience of supply chains for post-COVID economic recovery.
On the approach by the ASEAN leaders on Indo-Pacific, she said they also underlined the convergence between ‘ASEAN Outlook’ and India’s approach.
“Overall it was a fruitful exchange with ASEAN leaders and the summit was successful in bringing out the convergence between the two sides,” the official said.
She said ASEAN-India strategic partnership stands on a strong foundation of shared geographical, historical and civilisational ties. (PTI)