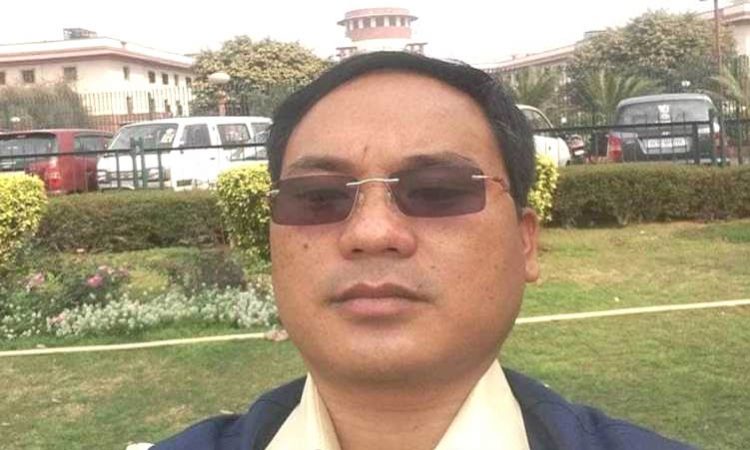 Itanagar, May 21: Suspected NSCN militants Tuesday gunned down sitting MLA and NPP assembly poll candidate Tirong Aboh and ten others, including his son and security personnel, in Tirap district of Arunachal Pradesh, a top police officer said.
Aboh (41), who represented the Khonsa West constituency, was seeking a re-election from the seat.
Initial reports suggested that seven people were killed in the attack, but Director General of Police (DGP) S B K Singh put the death toll at 11 later in the day.
Aboh was on his way to his constituency from Assam, along with family members, three police personnel and a poll agent, when the suspected NSCN rebels opened fire at their vehicles near 12 Mile area in the district at around 11.30 am, Singh told PTI.
One security officer, who sustained injuries in the incident, has been admitted to a hospital in Dibrugarh, Assam, the DGP said, adding that the MLA and ten others were killed on the spot.
Expressing his shock over the incident, Chief Minister Pema Khandu said the perpetrators will be hunted down.
“Action will be initiated to hunt down the perpetrators. My heartfelt condolences. May the departed souls rest in peace,” he said.
Condemning the attack, NPP president and Meghalaya Chief Minister Conrad K Sangma sought the intervention of the Prime Minister’s Office and Union Home Minister Rajnath Singh.
“The NPP is extremely shocked and saddened by the news of the death of its MLA Shri Tirong Aboh (Arunachal Pradesh) and his family. We condemn the brutal attack and urge @rajnathsingh and @PMOIndia to take action against those responsible for such attack,” Sangma tweeted.
Meanwhile, the Arunachal Pradesh Congress Committee blamed the ruling Bharatiya Janata Party for the “prevailing lawlessness and chaos” in the state.
“If elected representatives of the state are not safe under the present dispensations at the Centre and the state, how can common people feel secure,” the party said in a statement.
Demanding a high-level judicial inquiry into the incident, it also said, “Chief Minister Pema Khandu and his BJP government are solely responsible for lawlessness and all chaos in the state.”
Aboh was elected from the Khonsa West seat in 2014 on a Peoples’ Party of Arunachal (PPA) ticket.
Assembly polls were held concurrently with Lok Sabha elections in Arunachal Pradesh. (PTI)

Dimapur, May 21: The NDPP has vehemently condemned the cold blooded assassination of Tirong Aboh, MLA from Arunachal Pradesh representing Khonsa West assembly constituency along with his son and nine others in an ambush near Bogapani.
“Such senseless and cowardly act of violence has no place in today’s world especially at a time when the North East region is emerging out of its violent past,” it said.
The NDPP also conveyed heartfelt condolences to the family members of the deceased and prayed for the departed souls to rest in peace.
NPP: The National People’s Party, Nagaland has expressed shock at the dastardly assassination of sitting MLA Tirong Aboh who was killed in an ambush along with six others by suspected militants in Arunachal pradesh on Tuesday.
Condemning the murder, the State NPP demanded the concerned authorities to nab the culprits and award befitting punishment at the earliest.
The party asserted that such dastardly acts cannot be justified in any manner and ought to be condemned by all right thinking people. The party also demanded CBI enquiry on this matter.
This is the second of such incident where NPP party is targeted during this election. On 29th March 2019 one NPP supporter was killed and other was inflicted with grievous injuries by suspected militants in Tirap district.
NPP, Nagaland Unit conveyed heartfelt condolences to the bereaved family members and also wished speedy recovery to the injured person.
NPCC: The Nagaland Pradesh Congress Committee (NPCC) has expressed shock and condemnation at the brutal assassination of NPP MLA from Khonsa West, Tirong Aboh and his family members at Bogapani in Tirap District of Arunachal Pradesh.
“We strongly condemn and fully reject those elements of violence that have no respect for human life or values. No amount of justification can compensate for this heinous crime that is still being executed without any hesitation,” it said in a press release.
The NPCC demanded that the Government of Arunachal Pradesh and the Union Home Ministry to take serious note of this dastardly killing of a sitting legislator that has sent shockwaves across North Eastern states and order a high level enquiry to unearth the entire conspiracy and bring perpetrators to book.
The NPCC also conveyed condolences to the bereaved families and prayed for the departed souls to rest in peace.
(Page News Service)