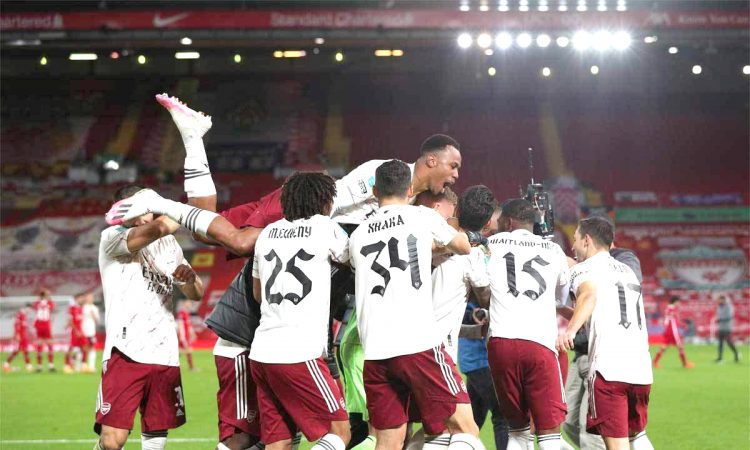 Arsenal players celebrates after winning the shootout against Liverpool

LONDON, October 2: Arsenal held their nerve to reach the League Cup quarterfinals as Bernd Leno saved two penalties in a 5-4 shootout win over Liverpool after Thursday’s 0-0 draw at Anfield.
Mikel Arteta’s side had already beaten Liverpool on penalties in the Community Shield earlier this season and they repeated the trick in the fourth round tie.
Joe Willock scored the winning penalty after Leno saved from Divock Origi and Harry Wilson.
Adrian kept out Arsenal’s third spot-kick from Mohamed Elneny, but Alexandre Lacazette, Cedric Soares, Ainsley Maitland-Niles and Nicolas Pepe all netted before Willock sent the Gunners through.
Arsenal, who haven’t lifted the League Cup since 1993, have won three of their last four meetings with Liverpool in the space of just 11 weeks.
Liverpool beat the Gunners 3-1 in the Premier League at Anfield on Monday, but Arsenal took the spoils against the champions in the league in July and the Community Shield in August.
Arsenal’s disciplined display was another sign that the FA Cup winners are heading in the right direction under Arteta’s astute leadership.
It was also revenge for last season’s League Cup defeat on penalties against Liverpool, when the Gunners led 3-1 and 4-2 in a thrilling 5-5 draw.
There was less drama until the shoot-out on this occasion as Liverpool boss Jurgen Klopp made nine changes, with only Virgil Van Dijk and Mohamed Salah retaining their places.
Arsenal made eight changes as Bernd Leno, Rob Holding and Granit Xhaka retained their spots.
Takumi Minamino should have put Liverpool ahead when the Japanese forward volleyed against the bar from five yards after Diogo Jota’s header was pushed out by Leno.
Leno underlined why Arteta decided to restore him to the team and sell Emiliano Martinez to Aston Villa, making a superb stop from Van Dijk’s closerange effort and emerging as the hero in the shoot-out.
In Thursday’s other fourth round action, Stoke claimed a shock 1-0 win at Aston Villa, while Brentford reached the last eight for the first time with a surprise 3-0 victory against Fulham.
Villa have won their first two Premier League games this season, but boss Dean Smith made 11 changes for Stoke’s fourth round visit and his understudies were not up to the task.
Stoke also fielded an under-strength team, but Michael O’Neill’s Championship team won it in the 26th minute when Sam Vokes headed in Jordan Thompson’s corner.
After reaching the final last season, when they lost to Manchester City at Wembley, this was a more forgettable exit for Villa.
“It’s a massive missed opportunity and I said that to the players. I don’t often get into them at half-time but I did today,” Smith said.
“With the tempo we played at it was a lacklustre first half and an awful performance.”
Brentford earned a measure of revenge for their Championship play-off final defeat to Fulham last season as they swept aside their Premier Leagueopponents.
Facing a struggling Fulham side who made a host of changes, Thomas Frank’s team took the lead eight minutes before half-time.
Iran midfielder Saman Ghoddos found space down the right and squared the ball for Finnish youngster Marcus Forss to slam home.
Said Benrahma, linked with several Premier League clubs, doubled the Championship side’s lead when the Algerian forward arrived at the far post to finish off Ethan Pinnock’s header.
Making his first start of the season, Benrahma finished off west London rivals Fulham with a superb strike from long-range in the 77th minute.
“We are where we are. This is a team in transition, we came fourth in the Championship last year,” Fulham boss Scott Parker said.
“The players are learning. It’s new to them. When you go up to the Premier League you need to learn quickly.”
Tottenham, Newcastle, Manchester City, Manchester United and Everton reached the quarter-finals on Tuesday and Wednesday. (AFP)