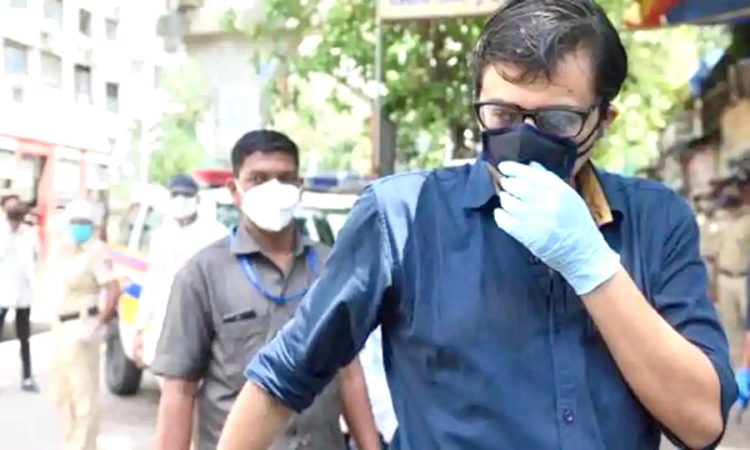 Editor-in-Chief of Republic TV Arnab Goswami’s counsel had earlier told the bench that the journalist has not interfered with either the proceedings of any of the committees of the Assembly or the Assembly itself. (HT Photo)

MUMBAI, NOVEMBER 4: Police on Wednesday arrested Republic TV Editor-in-Chief Arnab Goswami here for allegedly abetting suicide of a 53-year-old interior designer in 2018, a police official said.
The official said a team of Alibaug police picked up Goswami from his Lower Parel house in the morning. Goswami, who was seen being pushed into the police van, claimed he was assaulted by police at his home, before being taken away.
In 2018, the architect and his mother committed suicide over alleged non-payment of dues by Republic TV, police said.
In May this year, Maharashtra Home Minister Anil Deshmukh announced he has ordered a fresh probe in the case after a complaint by Adnya Naik, daughter of the architect Anvay Naik.
Deshmukh said Adnya alleged that the Alibaug police had not investigated the alleged non-payment of dues from Goswami’s channel, which she claimed drove her father and grandmother to suicide in May 2018.
Police said Goswami was taken to Alibaug in Raigad district in connection with the suicide case.
In a viral video, police personnel who entered Goswami’s home are seen asking him if he is coming along with them peacefully, following which there is a brief scuffle.
While in the police van, Goswami is seen claiming that police assaulted him and his son and he was also not allowed to meet his in-laws.
Police said that in a suicide note, Anvay Naik, who owned Concorde Designs Pvt. Ltd, had claimed that he was ending his life due to non-payment of his dues from Goswami, Feroz Shaikh of IcastX/Skimedia and Niteish Sarda of Smartworks.
Police said that as per the note, the 3 firms owed Naiks company Rs 83 lakh, Rs 4 crore and Rs 55 lakh respectively.
Police said the 2 others named in the suicide note have also been arrested.
Responding to the claim on non-payment of dues, Republic TV had in a statement said the entire amount owed to Concorde had been paid.
BJP leaders condemn arrest
Meanwhile, senior BJP leaders reacted strongly to the police action against Goswami.
Condemning the arrest, BJP president JP Nadda on Wednesday said it was an attempt by Congress leaders Sonia Gandhi and Rahul Gandhi to “silence” those who disagree with them.
In a series of tweets, Nadda said, “Every person who believes in a free press and freedom of expression is furious at the Maharashtra Government’s bullying and harassment of Arnab Goswami”.
“This is yet another instance of Sonia and Rahul Gandhi-directed antic of silencing those who disagree with them”, Nadda charged, while describing the entire incident as “shameful”.
Attacking the Gandhi family, Nadda said “India did not forgive Indira Gandhi for the Emergency. India never forgave Rajiv Gandhi for his assault on press freedom”.
“And now, India will again punish Sonia-Rahul Gandhi for their brazen and intimidating use of state power to get equal with journalists”, he said.
Information & Broadcasting Minister Prakash Javadekar described it as “an attack on press freedom” in Maharashtra and said it reminded of the “Emergency days”.
Javadekar tweeted, “We condemn the attack on press freedom in Maharashtra”.
“This is not the way to treat the Press. This reminds us of the emergency days when the press was treated like this”, he said.
Union Minister Smriti Irani condemned Goswami’s arrest, saying if those in free press don’t stand up in support of him then they are tactically in support of fascism.
Irani, the Women & Child Development Minister, tweeted, “Those in the free press who don’t stand up today in support of Arnab, you are now tactically in support of fascism. You may not like him, you may not approve of him, you may despise his very existence but if you stay silent you support suppression. Who speaks if you are next?”.
Union Law Minister Ravi Shankar Prasad described the senior journalist’s arrest as “seriously reprehensible, unwarranted and worrisome”.
He also questioned the silence of the Congress leadership when its Government in Maharashtra was “blatantly suppressing freedom of press”.
“The arrest of senior journalist Arnab Goswami is seriously reprehensible, unwarranted and worrisome. We had fought for freedoms of Press as well while opposing the draconian Emergency of 1975”, Prasad said in a series of tweets. (PTI)