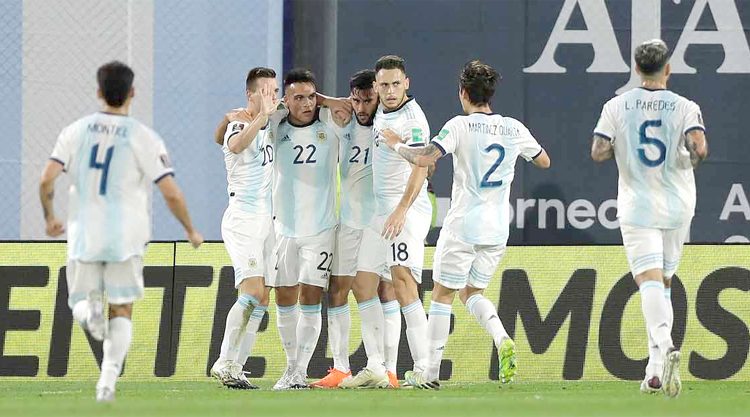 BUENOS AIRES, November 13: Argentina conceded a first-half penalty but recovered to secure a 1-1 draw against Paraguay in the 2022 World Cup qualifiers in Buenos Aires on Thursday.
Angel Romero scored his third goal in three internationals when he coolly rolled home the penalty for Paraguay midway through the half after Lucas Martinez Quarta was adjudged to have brought down Miguel Almiron.
Nicolas Gonzalez equalised for Argentina four minutes before half-time when he bulleted a header home from a Giovani Lo Celso corner kick.
After matching the home side for the opening period Paraguay were on the back foot for most of the second half in the Boca Juniors stadium, empty because of the coronavirus pandemic.
Argentina thought they had taken the lead after an hour when Lionel Messi sidefooted home, but the goal was chalked off for an earlier infringement inside their own half that was picked up by the Video Assistant Referee.
At the other end, Paraguay had a loud shout for a penalty turned down after the ball hit the arm of centre back Nicolas Otamendi, who lamented Argentina’s luck after the game.
“I think in the first half we were a bit uncomfortable with the pressure but when we managed to pass the ball about and find spaces we spent almost the entire second period in their half of the field,” Otamendi said. “We got the goal but unfortunately it didn’t stand.”
The result means both sides remain unbeaten after the first three of their 18-game quest to reach the finals in Qatar.
The top four in the 10-team South American qualifying section automatically make the finals, and the fifth-placed side go into an inter-regional play-off.
Argentina’s next game is away at Peru on Tuesday, while Paraguay take on bottom side Bolivia at home the same day.
Bolivia lost 3-2 at home to Ecuador earlier in the day thanks to a late penalty.
The home side took the lead shortly before half-time only for Ecuador to score twice early in the second period.
Although Marcelo Moreno equalised for Bolivia, Carlos Gruezo scored Ecuador’s winner from the spot two minutes from time, consigning Bolivia to their third loss. (Reuters)