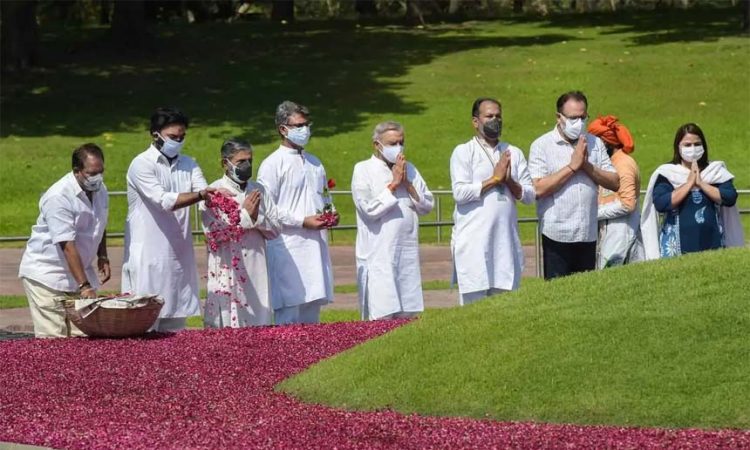 New Delhi, May 27: The Congress on Thursday paid tributes to India’s first Prime Minister Jawaharlal Nehru on his death anniversary, saying he was the architect of modern India who made unforgettable contributions to the country and the world.

Congress leader Rahul Gandhi also paid floral tributes to Nehru at his memorial Shanti Van here this morning.
Nehru, the first prime minister of India, held office between August 1947 and May 1964. He died on this day in 1964.
“Today, we honour Pt Jawaharlal Nehru, who has made unforgettable contributions to India & the world. He was a man of towering intellect, the architect of modern India, a true patriot,” the Congress said on its official Twitter handle.
“He fought ardently for India’s Independence, democracy and further development,” the party tweeted with the hashtag ‘RememberingNehru’.
Paying homage to Nehru, Gandhi posted a quote of his great grandfather, “Evil unchecked grows, evil tolerated poisons the whole system.”
“Remembering the wise words of Pandit Jawaharlal Nehru on his death anniversary,” the former Congress chief tweeted.
Congress general secretary in-charge, organization, K C Venugopal, also posted a quote of Nehru, “Without peace, all other dreams vanish and are reduced to ashes.”