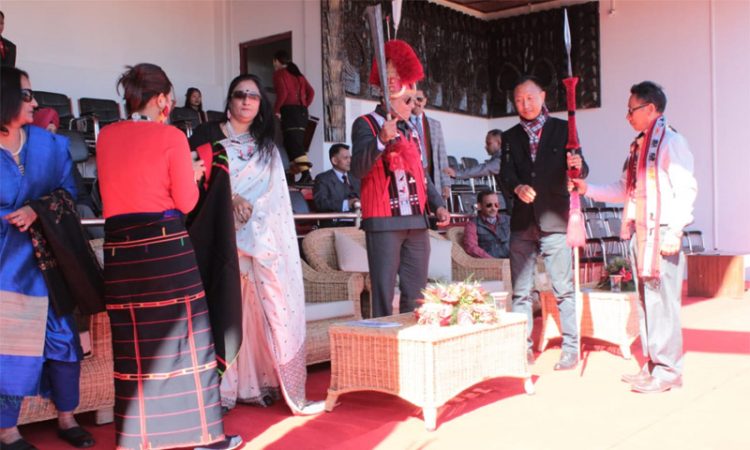 Kohima, December 9: “The Assam Rifles and Army will contribute every possible means to make Nagaland a jewel of the North East region,” said Lt Gen Gopal R, AVSM, SM General Officer Commanding of Spear Corps Dimapur.
Addressing the penultimate day of the Hornbill Festival of Nagaland at Naga Heritage Village Kisama here on Sunday, the General Officer fully aware of the vexed Indo-Naga political movement, called upon the mammoth gathering comprising of thousands of foreign and domestic tourists and local visitors, to “take a pledge to ensure that peace, prosperity and progress returns to this pristine land”.
In this, he asserted that the Assam Rifles, which is known as the ‘Sentinel of the Hills People’ and the Army would contribute in whatever manner to make Nagaland a ‘jewel in the North East’ and that they will leave no stone unturned to assist the people in achieving these noble goals.
Mesmerized and energized with the tradition and culture of Naga people, the GoC echoed the sentiments of the former Chief Minister of Nagaland, Late J B Jasokie, while describing the State as the land where race, rivers, ranges regulate the rhythm of life in addition to being the abode of honest and most hospitable people.
He said that the Naga culture is not only about colourful costumes, dances and songs but much more so of the values of honesty, simplicity, hospitality and the great Naga warrior tradition.
He called upon the Naga people to preserve the custom and tradition of honesty and truthfulness so that the future generation will imbibe the great tradition of the forefathers.
Also conveying greetings for attaining 55 years of statehood, the General Officer acknowledged Chief Minister Neiphiu Rio and Tourism Department for the opportunity to be part of the great festival.
Accompanied by his wife, Rajashree Gopal, Naga cultural troupes attired in cultural costumes accorded a traditional welcome to the dignitaries.
The day was marked by cultural performance by the 17 Naga tribes while the special attraction was the Traditional shot-put competition, wherein competitors had to throw a 20kg stone. It was organized by Youth Resources and Sports Department.
(Page News Service)