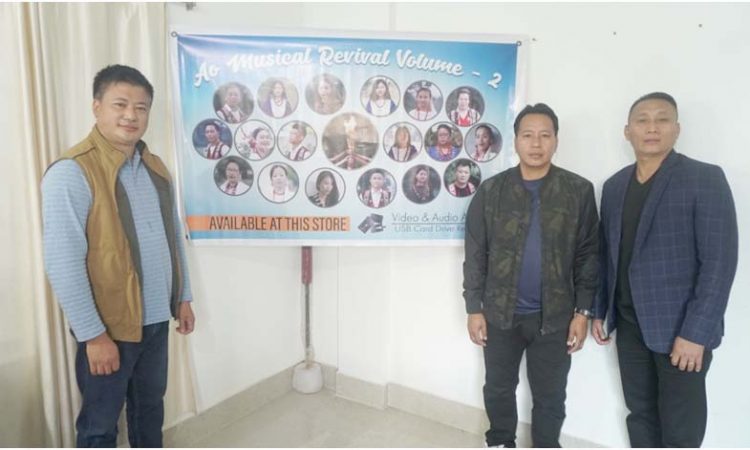 Ao Musical Revival Volume II (AMR 2) was released at the residence of the producer, Talitemjen Imchen on February 2. The producer thanked all the 18 singers for their whole hearted participation and performance achieving immense results despite the on-going pandemic. He also thanked the owner of Music Bakery, Sosang Longkümer for composing and providing appropriate and melodious music for each and every song.

He also humorously added that Charles Cresen is/was the best videographer for the Ao Musical Revival Team.
The producer stated that the production and release of AMR 2 was successful only because of the sponsorship and support of Mr. & Mrs. A Chuba Ozüküm and his family. He said that a lot of effort goes into the production an album however insignificant it may seem to be and hoped that music lovers will respect the tireless effort that he along with his team and sponsors have put in for the production of this album a genre which is on the verge of extinction.
He also said that there are copyright laws for songs/lyrics/music like any other criminal activities and warned against infringement on the copyrights of the authors/publishers and performers.
During the release of AMR 2, members of AMR, Bendang Imchen and C Purtoshi Jamir also spoke on the project and its production along with dedicatory prayers. AMR 2 album has 12 songs and is will be available in pen drives (Music card), the cost of the pen drive is Rs. 1000 and will be available in the following outlets viz: Zenith C.D Library, Kohima Phone No. 7085994958 (Fira Hotel Opposite Jail Colony), Eastern Book Depot, Mokokchung Phone No. 9862983463 (MTBA down stairs), Christian Literature Center, Dimapur Phone No. 8794016520 (Nyamo Lotha Road) and also with the AMR members.