HomeTop StoriesAnything that will happen in J&K will come to Parliament: Governor Malik
Top Stories
2 years agoAugust 3, 2019No tags 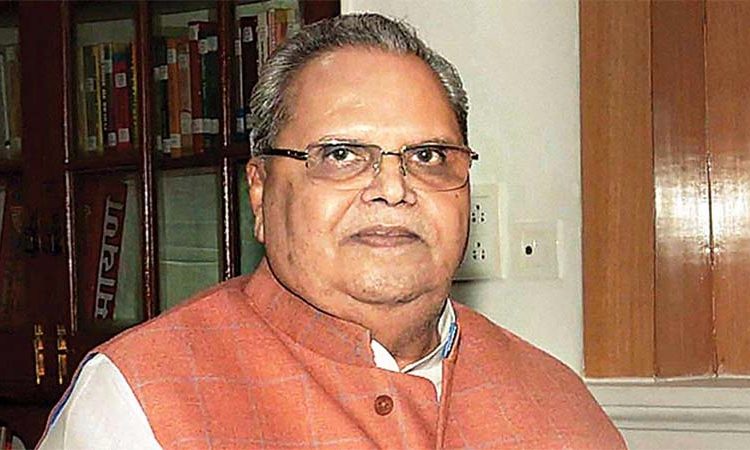 SRINAGAR, August 3: Amidst heightened speculation that the Centre is planning something big in Jammu and Kashmir, state governor Satyapal Malik on Saturday said that neither the Prime Minister nor the home minister has hinted anything about any action in the state, though he hinted that something could happen in Parliament next week.
“Parliament is in session. It is to meet for 3-4 days. So, whatever will happen will not happen secretly. It will come to parliament and will be discussed. Wait till Monday or Tuesday.
“Till today, I have no inclination, no information. I have talked to everybody in Delhi and nobody has given me any hint that they will do this or that. Somebody says it is trifurcation, Article 35A, 370. Nobody has discussed these with me, neither Prime Minister nor Home Minister,” he told ANI.
The governors’ remarks assume significance in the backdrop of swirling rumours or speculation that the Centre could alter the provisions that gloves special status to Jammu and Kashmir including on buying land and employment, its trifurcation and delimitation.
Friday’s decision by the state government to call off the Amarnath Yatra on security concerns added fuel to the fire with the Yatris and tourist in the Valley told to leave the state immediately following intelligence inputs that Pakistan army was planning to target the Yatra through terror attacks.
Malik also said the government was not planning to take any “drastic” step concerning Jammu and Kashmir and blamed “some political parties” for unnecessarily creating panic.
“As far as my knowledge, there is no inclination that something is going to happen here. Everything is normal. Unnecessary panic is being created by people with vested interest and especially by some political parties. Nothing drastic is going to happen,” Malik told ANI here.
He appealed to the residents of the state to stay calm and not worry.
The governor said that the advisory to tourist, which fuelled fears in the Valley, could have been avoided.
He said: “We could have done it without the advisory. But it is our responsibility to ensure the security and safety of the tourists.
You have seen the Pakistani weapons have been recovered.”
Malik further said that Valley is reeling under the possibility of a suicide attack by the terrorists who are sitting on the Pakistani side of the line of control to across over in the state.
“Lot of terrorists are sitting across the line (of control) to cross over and they are fidayeen (suicide bombers). If something happens, that will have repercussions all over the country. We wanted to avoid that,” he said.
He also assured that the holy mace of Amarnath Yatra will reach to the holy shrine as per the plan. “Chhadi Mubarak (holy mace) will go. Every ritual will take place as planned,” he said.
On Friday, General Officer Commanding (GoC) of Army’s 15 Corps Lt General K J S Dhillon told media that in the last three to four days, Army had received specific reports of Pakistan terrorists plotting to carry out an attack on the ongoing Amarnath Yatra.
Displaying pictures of a land mine having a Pakistan stamp, Dhillon said combined teams of the Army, CRPF and Jammu and Kashmir Police have been carrying out searches for the last few days.
The government’s advisory to call off Amarnath Yatra came right after the Army’s press conference (ANI)