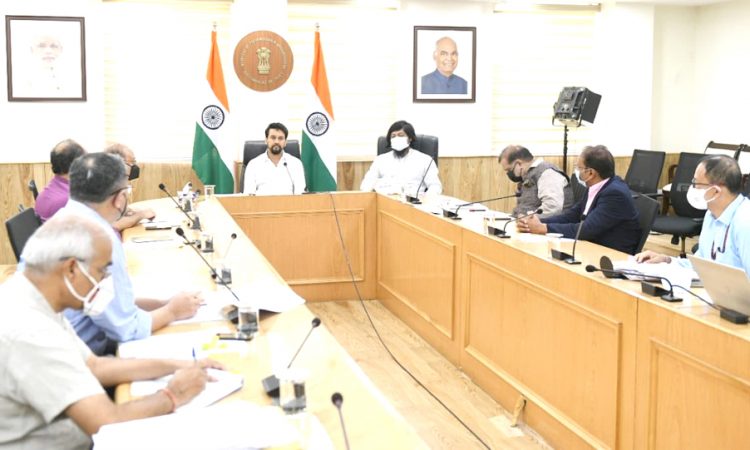 NEW DELHI, July 12: Sports minister Anurag Thakur on Monday chaired the first review meeting after taking charge of his ministry as he took stock of India’s preparation for the upcoming Tokyo Olympics.

The meeting of the high-level committee was also attended by his deputy Nisith Pramanik and the officials of the sports ministry, Sports Authority of India (SAI) and Indian Olympic Association (IOA).
While it was the seventh meeting of the committee, it was their first for Thakur and Pramanik after taking charge of the sports ministry last week.
Thakur took charge as sports minister from Kiren Rijiju last week following a cabinet reshuffle by Prime Minister Narendra Modi.
The 35-year-old Pramanik, a first-time MP from Bengal, was appointed as the Minister of State for Youth Affairs and Sports under Thakur, who is a cabinet minister.
During the meeting chaired by Thakur, various issues, including the provision of world class training facilities for the Olympic-bound athletes were discussed.
“It was a normal review meeting of the high-level committee which has been going on for long. In these meetings, we take stock of Indian athletes’ preparation for the Olympics, to see if everything was on track or anything is pending which needs to be addressed,” an official source told PTI.
IOA President Narinder Batra said in a statement that during the meeting, the minister was “briefed about the preparations of Indian contingent for Tokyo Olympics, vaccination of athletes and officials, travel and stay arrangements … arrangements at Delhi Airport for 17th July when first contingent departs from India and all other related issues.”
“Hon’ble Minister was kind enough to request his officers in the ministry to ensure proper arrangements are made at Delhi Airport for athletes and officials who leave from Delhi by Air India on 17th July,” he said.
“It was a very fruitful and productive first meeting with Hon’ble Minister.”
The meeting was attended by Secretary Sports Ravi Mittal, Sports Authority of India Director General Sandip Pradhan, CEO TOPS Rajesh Rajagopalan and Joint Secretary Sports L S Singh.
Besides Batra, Boxing Federation of India chief Ajay Singh and Athletics Federation of India president Adille Sumariwala were present from the IOA’s side.
Thakur also discussed with the officers the progress of #Cheer4India campaign and the preparations for the interaction of the Prime Minister Narendra Modi with Olympic-bound athletes on Tuesday.
Modi will interact with the athletes virtually in his bid to motivate them ahead of the Tokyo Olympics which opens on July 23.
The interaction will be telecast live on Doordarshan and on various government social media platforms.

More than 120 Indian athletes will participate in the Tokyo Olympics amid strict health safety protocols because of the COVID-19 pandemic. The Games will be held without any spectators from July 23 to August 8. (PTI)