HomeInfotainmentAnupam Kher wraps up the shoot of The Accidental Prime Minister, says he ‘wrongly judged’ the former PM
Infotainment
2 years agoOctober 27, 2018No tags 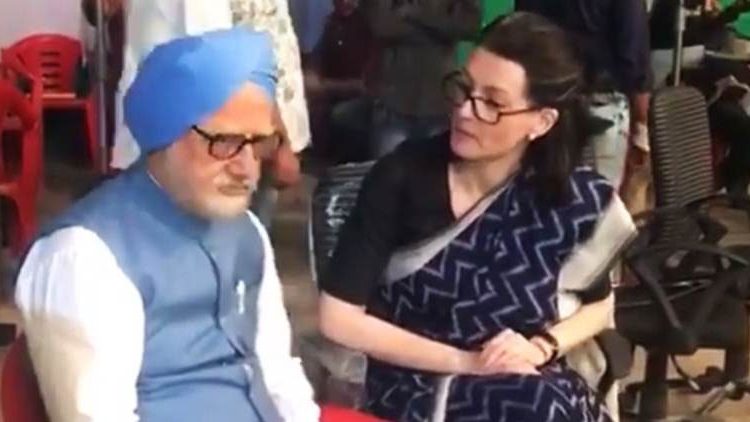 Anupam Kher has shared a behind the scenes video from the sets of his upcoming film The Accidental Prime Minister. In the video, Kher, dressed as the former PM Dr Manmohan Singh and German-born actor Suzanne Bernert who plays the role of former Congress chief Sonia Gandhi are in a conversation. A few hours later, the actor posted another video and informed his fans and followers about the wrap of the film.
The Accidental Prime Minister is a political drama based on the book of the same name, written by Sanjay Baru, who served as the media advisor of Manmohan Singh from 2004 to 2008. Akshaye Khanna also stars in the movie and essays the role of Baru. Lipstick Under My Burkha fame Aahana Kumra will be seen as Priyanka Gandhi in the film.
Sharing the video on his social media handles, Kher wrote, “On the last day shoot of #TheAccidentalPrimeMinister someone shoots a off camera moment between @suzannebernert playing #MrsSoniaGandhi & I having tea & biscuits. Shares it on social media. It is already on tv now. Best option is to share it myself. So here it is.”
The 63-year-old actor, in another post, mentioned how his perception about the former PM changed after living the role for a year. He wrote, “And it is a WRAP for one of my most cherished films #TheAccidentalPrimeMinister. Thank you the cast and the crew for the most enriching times. Thank you #DrManmohanSinghJi for your journey. It has been a great learning experience for me. I did have my reservations before doing this film and also wrongly judged you at times but today after finishing the shoot and having almost lived the role for more than one year i can say it with utmost sincerity that history will not misjudge you. Will wait to have that cup of tea with you once you watch our film. ???? #JoyOfCinema @tapmofficial.”
Earlier too Kher has kept his fans updated about the debutante Vijay Ratnakar Gutte directorial. He introduced the cast of The Accidental Prime Minister with the stills from the film. His striking resemblance with Dr Singh has already brought him much appreciation.