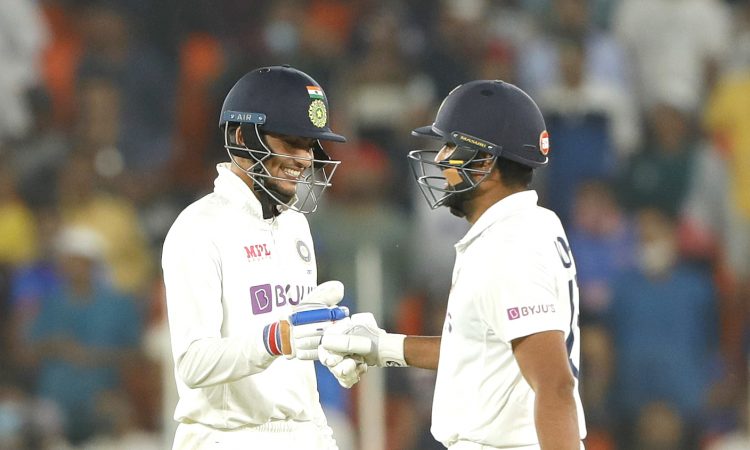 Ahmedabad, February 25: After being set a paltry target of just 49 runs by England to win the day-night Test, India openers Rohit Sharma (25) and Shubman Gill (15) took the hosts home in quick time, chasing down the small target in just 7.4 overs with all 10 wickets intact.
With the victory, India took a 2-1 lead in the four-match series as they got closer to a spot in the World Test Championship final against New Zealand. England are out of contention for the WTC final now.
After losing the first Test by 227 runs, it has been quite a turnaround for the hosts.
With the pitch assisting the spinners, England only used Jack Leach and Joe Root in the hope of quick wickets in India’s second innings. But it did not work for them, as the target was too small to intimidate the Indians. The India openers played freely to give the new stadium a taste of success in its first international match, with Rohit finishing off the chase in style by hitting a six off Root.
The fourth and final Test will also be played here in Ahmedabad from March 4.
There’s no doubt that the pitch at the new Motera stadium was a very very challenging one. Both teams struggled to bat on it, as the match finished in just two days. It has in fact equalled the record for the shortest Test match in terms of days played.

After managing just 112 in their first innings, England were skittled out for 81 runs to set India a 49 run target to win the match and take a 2-1 lead in the four match series. This was also England’s lowest total against India ever.
The English batsmen again failed to read the spin duo of Axar Patel (5-32) and Ravichandran Ashwin (4-48) as they were bundled out in just 30.4 overs in their second innings.
The visitors did extremely well in the first session on the second day as they surprised the hosts’ batting line-up with some excellent spin bowling. Skipper and part-time spinner Joe Root (5 for 8) took his first five-wicket haul and along with Jack Leach (4-54) bundled out India for a paltry 145 to ensure that India could take just a 33 run first innings lead.
It opened up the contest, but their batsmen’s ability to handle the Axar-Ashwin combo remained the big question mark.
And to England’s horror, Axar, who took a career best 6 for 38 on Day 1, struck with the very first ball of their second innings as he castled Zack Crawley for a duck. Crawley was Endland’s top scorer in their first innings. Axar then removed Jonny Bairstow off the third ball, leaving England in disarray at 0 for 2.
There was no stopping Axar on Thursday as he forced an edge off Dom Sibley (7) soon in the ninth over and in no time England were reduced to 19/3, still 14 runs behind the hosts’ first innings total.

Ben Stokes and Root then tried to steady the innings with the former playing the aggressor. Stokes even hit two back-to-back fours off Ashwin, but the off-spinner had the last laugh as he trapped the left-hander leg before for 25.
In the very next over, Root became the fourth victim of Axar as the spinner took his first 10-wicket haul in a match in only his second Test. Root was trapped leg before for 19 and with the score at 56/5, England’s innings was truly crumbling.
After that it was a mere formality as Ashwin removed Ollie Pope (12) and Jofra Archer (0) in consecutive overs to become only the fourth Indian bowler to take 400 wickets in the longest format of the game. Legendary pacer Kapil Dev and spinners Anil Kumble and Harbhajan Singh have gone past the milestone for India before Ashwin.
Axar then completed his third consecutive fifer with the wicket of Ben Foakes (8).
Jack Leach (9) became Ashwin’s fourth victim in the next over, before Washington Sundar, India’s third spinner in the game, was given his first over. In fact it was the first bowling change by the hosts after 30 overs.
Sundar ended England’s misery with the wicket of James Anderson.
After losing the second Test in Chennai, England must have hoped for a turnaround in the day-night third Test at the newly built stadium in Ahmedabad.
The visitors started the proceedings on a positive note by winning the toss and deciding to bat first, but their team selection came under scrutiny quite immediately. They have chosen four pacers (three specialist) and a lone spinner in Jack Leach for the match, while hosts India went with three spinners and two pacers.
Both decisions, batting first and having just one spinner, backfired on the first day itself as home boy Axar Patel (6-38) and veteran Ravichandran Ashwin (3-26) bamboozled the visitors for just 112 runs in 48.4 overs. Only the opener Zak Crawley managed to put up a decent score of 53 off 84 balls. And they looked well out of the contest at the end of the opening day as India finished on 99/3 with Rohit Sharma batting on 57.
The wicket of well-set Virat Kohli (27) in the final over of Day 1 must have given England some hope. But it was short lived. (Agencies)