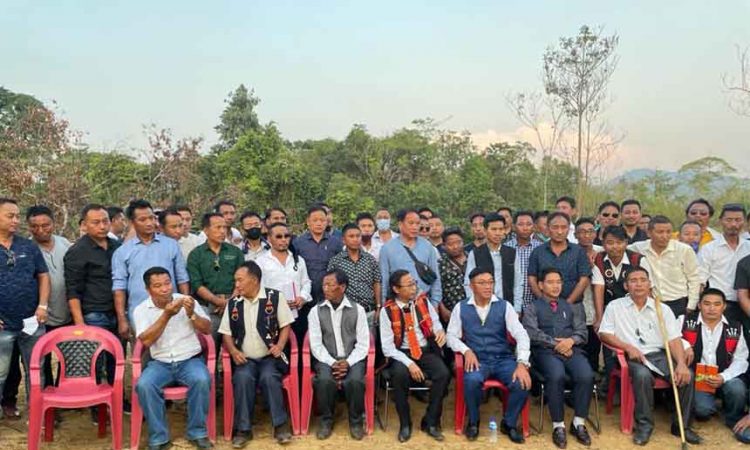 Dimapur, May 2: The Annual Joint Council meeting of the NSCN/GPRN (Reformation) was held at CHQ on April 28 and 29, which was chaired by Speaker of the House, Ihese Aye and was attended by the national workers from all the Naga inhabited areas of Arunachal Pradesh, Manipur and Nagaland, wherein it reaffirmed and reiterated full support to the dynamic Leadership of the President, Y Wangtin Naga, the Vice-President, Akato Chophi and Ato Kilonser/General Secretary, Inno P. Tikhak.

The house deliberated in length on the Naga Political Issue and acknowledged the Convenor, N Kitovi Zhimomi and Co-Convenors, Zophra Vero, Isak Sumi, Hozheto Chophi, Toshi Walling and Kimiukham Yimchunger for their Leadership and Statesmanship
The NSCN(R) also appreciated the contribution of the NTC, CNTC, NGBF and other NGO’s/CSO’s for working selflessly and tirelessly to bringing all the Naga people together for an amicable solution with the GOI.
The ACL’s (Advisor to the Collective Leadership) also attended the meet including Omnyei Konyak, O. Chingmak Chang, Viniho Kiho, Maj.(Retd.) Joseph Anal, N.Panmei, and Lt.Gen. (Retd) Nyemlang Konyak who were administered Oath of Allegiance and Office of Secrecy by the President whereas the newly inducted Kilonsers, Deputy Kilonsers and Tatars numbering around 58 were administered by the Speaker.
A two minutes silence was observed in paying homage to all the martyrs who had laid down their precious lives in defence of national cause.
After long deliberations, discussions and reasoning, the meeting resolved to continue to uphold and to honour the ‘Naga issue and the ongoing Naga peace process’ as topmost priorities.
It resolved to strengthen the ‘brotherhood, fraternity and sodality’ of the NSCN/GPRN (R), in solidarity, comradeship and camaraderie; to revoke earlier ‘Expulsion Order’ against 6 members that was inadvertently published; to agree and to concur with the ‘Presidential Amnesty and Pardon’ against some earlier ‘Expulsion Orders’ keeping in mind the Naga Issue at its Zenith; to retract (in regret) some earlier statements issued and published from any quarters that may have unintentionally and inadvertently created some ‘pandemonium, perplexity, fuss and confusions’ but rather, resort to pave way for the ‘Naga Peace Talks’ to reaching and achieving its logical conclusion that is acceptable and honourable to all.
The meeting further resolved to check in all probability, with any kinds of malicious interferences aiming to derail and tamper with the integrity of the NSCN and also reiterated that the unity and integrity of the NSCN is paramount and therefore, any forces that may be detrimental to the unity of the party will be collectively dealt with at all costs and will zealously guard against any forces that may try to sow seeds of division from both outside and within’ the party.
It also resolved to admonish and to repel any kinds of ‘shoddy and deceptive moves’ by any individual, groups or divisive forces, working tirelessly day in and day out, attempting to sow seeds of discords, animosities, enmities, hostilities and predicaments.

The NSCN (R) members were reminded that it is the responsibilities of every NSCN members to have and to hold the NSCN’s principles and ethics at the highest and were sternly warned to refrain from further creating any kinds of miasma and unwholesome atmospheres or circumstances.
The meeting also appealed to well-wishers, patrons, public and friends to continue to uphold in prayers and to strengthen the NSCN and the Naga issue.
(Page News Service)