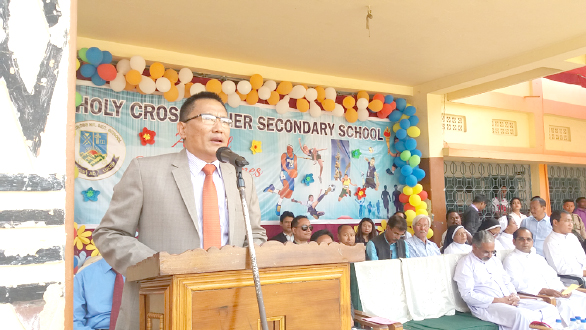 Dimapur, March 12: The annual Games and Sports of Holy Cross Higher Secondary School (HCHSS) began today in the school campus, which was graced by Deputy Commissioner, Dimapur, Kevekha Kevin Zehol as chief guest.
Speaking on the occasion, the DC lauded the school for being the pioneers in education, not only in Dimapur district but also in entire Nagaland. He also said that many alumni of this school are serving in the government at top positions.
Calling upon the students to take sports seriously, the DC said sports has many openings and one should know what exactly is his/her talent.
He also informed the students that they are living in a competitive world and it is their very important phase of life.
Stating that there are 27245 graduates and post graduates in the state who are without jobs, the number of students passing out from the school is adding to the number.
Taking the opportunity of the gathering of parents and students, he said that elections have been announced in the state and country and it is time for everyone to make clean election a reality. He also appealed to first time voters to come out and vote as voting is their right.
Students of the primary section presented aerobic while students also participated in bamboo climbing competition.
(Page News Service)