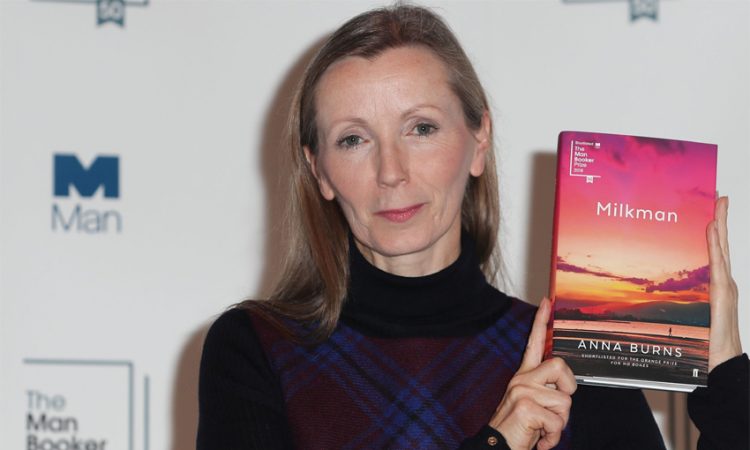 Anna Burns won the prestigious Man Booker Prize for fiction Tuesday for Milkman, a vibrant, violent story about men, women, conflict and power set during Northern Ireland’s years of Catholic-Protestant violence.
Burns is the first writer from Northern Ireland to win the 50,000-pound ($66,000) prize, which is open to English-language authors from around the world. She received her trophy from Camilla, Duchess of Cornwall, during a black-tie ceremony at London’s medieval Guildhall.
The 56-year-old Belfast-born novelist said she was “stunned” to have won. Burns said her books took a long time to complete, and she has often struggled financially since her first novel, No Bones, was released in 2001.
“I just wait for my characters to come and tell me their stories, and I can’t write until they do,” Burns told reporters. “Also, as with a lot of writers, they don’t earn much money. So that gets in the way of the creativity.”
Burns said that with her prize money, “I will clear my debts and live on what’s left.”
The writer said the germ of Milkman came to her in the image of a teenage girl walking down a street in a divided city while reading the novel Ivanhoe.
Milkman is narrated by a bookish young woman dealing with an older man who uses family ties, social pressure and political loyalties as weapons of sexual coercion and harassment. It is set in the 1970s, but was published amid the global eruption of sexual misconduct allegations that sparked the #MeToo movement.
“I think this novel will help people to think about ‘Me Too,’ and I like novels that help people think about current movements and challenges,” said philosopher Kwame Anthony Appiah, who chaired the judging panel. “But we think it’ll last it’s not just about something that’s going on in this moment.
“I think it’s a very powerful novel about the damage and danger of rumor,” he added,
Burns beat 5 other novelists, including the bookies’ favourites – American writer Richard Powers’ tree-centric eco-epic The Overstory and Canadian novelist Esi Edugyan’s Washington Black, the story of a slave who escapes from a sugar plantation in a hot-air balloon.
The other finalists were US novelist Rachel Kushner’s The Mars Room, set in a women’s prison; Robin Robertson’s The Long Take, a verse novel about a traumatized D-Day veteran; and 27-year-old British author Daisy Johnson’s Greek tragedy-inspired family saga Everything Under.