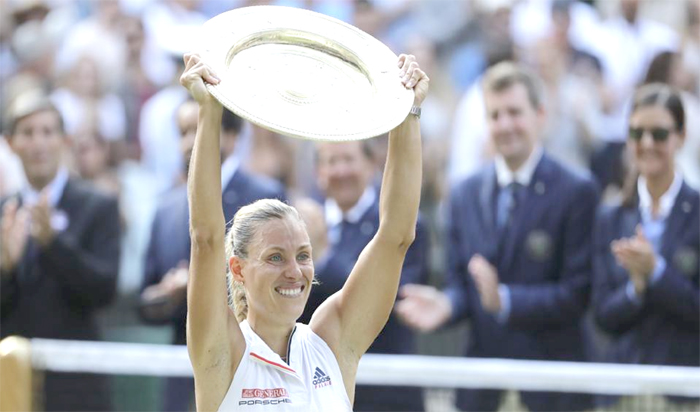 Germany's Angelique Kerber lifts the trophy after winning the women's singles final match against Serena Williams of the United States, at the Wimbledon Tennis Championships, in London, Saturday July 14, 2018.(AP)

LONDON, July 14: Germany’s Angelique Kerber stunned American Serena Williams 6-3, 6-3 on Saturday to win her first Wimbledon title.
The 11th seed took advantage of an error-strewn performance by the seven-time champion to become the first German woman to win the title since Steffi Graf in 1996.
American great Williams, playing in only her fourth tournament since becoming a mother last September, had been looking to match Margaret Court’s record 24 Grand Slam titles.
She was also seeking to become the first mother to win Wimbledon since Australian Evonne Goolagong in 1980.
The 36-year-old, unbeaten at the All England Club since 2014, had begun to look unstoppable during the fortnight and had dropped only one set in reaching her 10th Wimbledon final.
She had not faced anyone with the pedigree of the German though and was outmanoeuvred in the first set as Kerber’s dogged defence forced too many errors.
Williams dropped serve three times in the opening set and although she tried to fire herself up in the second she played a loose game at 2-3 and Kerber broke with a running pass.
Serving for the match, Kerber looked nervous as Williams got it back to 30-30 but she claimed victory when Williams netted, tumbling to the dusty
baseline in relief before being warmly embraced by her opponent.
Her win, revenge for a 2016 defeat in the final by Williams, snapped the American’s 20-match winning run at Wimbledon. (Agencies)