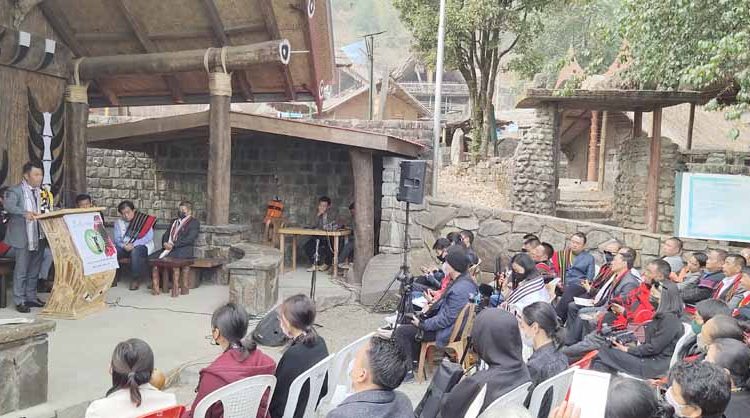 KOHIMA, FEBRUARY 25: The Angami community today celebrated its biggest festival, Sekrenyi with traditional fervour and gaiety in its morung at the picturesque Naga Heritage village, Kisama with Advisor for Youth Resources and Sports, Zale Neikha as special guest.

Sekrenyi, also known as Phousanyi or the purification festival, was hosted by Angami Youth Organisation (AYO) in collaboration with its four constituent bodies – Chakhro YO, Northern AYO, Southern AYO and Western AYO and as per instruction of its apex body, the Angami Public Organisation (APO).
Speaking on the occasion, Neikha called upon the Angami community to introspect their position in Naga society.
He said that as per the 2011 census, the population of Angamis is 2.68 lakh, but still lag behind other major tribes of the State in several aspects though the community is blessed to be in the owners of Nagaland’s capital.
Neikha said that out of the nearly 90 government departments, Angamis are serving as administrative heads in about 9 departments and heads of department in just about 8 departments, Angami IAS direct recruits are only one, no IPS officer while there are about 32 NCS and 18 NPS officers from the Angami tribe, and Neiphiu Rio as Chief Minister.
Lamenting the current position of the Angami tribe despite being owners of the capital district, Neikha remarked that unlike other tribes, Angami people do not want to help each other but become a stumbling block to each other’s prosperity.
The Advisor, therefore, emphasized on the need for Angami leaders to be united and supportive.
Neikha also lamented that the young and educated people are looking only for government jobs, while maintaining that ‘we have to understand vacancy arises only on retirement or demise of an employee’.
While agriculture is the mainstay of Nagas in general, we need to pursue it and also move towards entrepreneurship and business instead of solely depending on the government jobs, he said,
“We feel business is for the uneducated but educated have better knowledge to move ahead while the leaders and elders should encourage youngsters to take up business and entrepreneurship instead of remaining unemployed,” said Neikha.
He also emphasized on the need for the youngsters to uphold the culture and tradition of the forefathers, while it should be the responsibility of the elders to pass on the heritage to the youngsters.
“Christianity is about our belief while the good old cultural and traditional practices should not be forgotten,” Neikha shared.
Dimapur:
With an aim to promote the value of the customs, tradition and cultural identity, the Chakhro Angami Kuda Union (CAKU) celebrated Sekrenyi at Northern Angami Colony Ground.
Kevilhulie Senotsu highlighted on ‘Sekrenyi Festival’, known as ‘The Purification Festival’, celebrated every 25th Feb by the Angami community which is held to wash off all the past sins.
Gracing the occasion as special guest) Advisor Excise, Sericulture & Minority Affairs, Zhaleo Rio, IAS (Retired) exhorted about the significance of Sekrenyi Festival.

“Angami people have the tendency to neglect programs, functions, etc. and being critical in judging programs… We always have excuses ready when we aren’t invited under special privileges, which has done more harm than good till date. But that only deter the progress of unity and development in the long run. It shows our lack of cooperation, unity or coordination,” he said.
He said without further explanation about Sekrenyi festival, “we must preserve our rich cultural diversity and maintain detailed records. He cited a saying, “When a rich man dies, a library is lost”, let us initiate the promotion of our culture while keeping elaborate records as to how, why, what, who, where or when a particular festival/ event takes place.”
Stating that Sekrenyi is celebrated as the festival of sanctification, he urged everyone to clean themselves by discarding unreasonable practices/habits and renew themselves with whatever is good.
On Covid, he stated, “Central Government as well as state Government has issued a number of safety measures and we must never be negligent in following them, instead use mask, sanitizer, proper hand washing and maintain 6ft. distance until the concerned dept. announce other measures/ health protocols.”

In his closing remark, Rio suggested other unions and organization under the Chakhro Public Organization to hold more of such programmes where every member of its community can come together and celebrate.
Recalling Dimapur as the ‘Mini-Nagaland’, housing all the tribes and the mainland population, he said engagement with the rich population will foster a sense of economic wealth and vibrance of life in our rights.
(Page News Service)