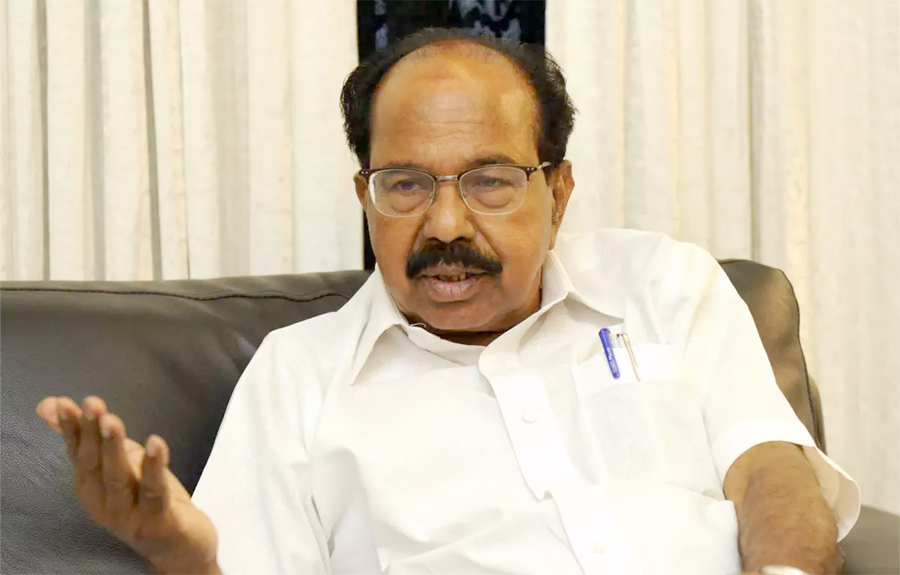 New Delhi, August 25: Senior Congress leader M Veerappa Moily, one of the senior most members of the ‘group of 23’ who have called for far-reaching reforms within the party, said on Tuesday it is an “admitted fact” that the organisation is not in a position to take forward ‘the Congress philosophy and protect the democracy’. He also asserted that Sonia Gandhi’s leadership is always required.
The former union minister further said the intention of the letter was to keep the party ready for the 2024 Lok Sabha polls as also for assembly and local bodies elections in the country.
“It is an admitted fact that organisation of the Congress party is not in a position to take forward the Congress philosophy and protect the democracy in the present turbulent condition prevailing in the country,” Moily said in a statement.
Stating that the Gandhi family is always known for patriotism and sacrifice, Moily said Sonia Gandhi’s leadership is always required and her consent to continue as president is the “most welcome step”.
The statement came a day after high drama at the Congress Working Committee meeting where many leaders, including former party chief Rahul Gandhi, lashed out at the letter writers.
“At any time of crisis, both at the national and state level, I always stood by the national leadership of the Congress party to preserve the unity and integrity of the party,” Moily said, underlining that he has been in the Congress since the last 50 years having joined under the leadership of Indira Gandhi.
“Even during my tenure as Chairman of the Standing Committee on Finance, I was critical of the performance of the NDA government. My loyalty to the Congress party is always steadfast and will continue to be present till my life,” the former Karnataka chief minister said.
Noting that the Congress is one of the two big national parties in the country, Moily alleged that the NDA government at the Centre has become a threat to the basic principles of democracy — secularism, equality and inclusiveness.
The Congress should always be battle-ready to fight the divisive politics of the BJP, he said.
“Since I have been one of the signatories to the letter addressed to the Congress President, the intention is absolutely to keep the party ready for the 2024 Lok Sabha, assembly and the local bodies elections being held in the country,” Moily said.
The CWC urged Sonia Gandhi to continue as its interim chief till an AICC session can be convened and authorised her to effect necessary organisational changes to deal with the challenges facing the party.
After the seven-hour meeting of the party’s top decision-making body, the CWC made it clear that no one will be permitted to undermine or weaken the party and its leadership.
The CWC also resolved that inner-party issues cannot be deliberated through the media or in public fora and all such issues must be raised within the party “in the interest of propriety and discipline”.
Separately, some other members of the ‘group of 23’ also said on Tuesday that they were “not dissenters” but “proponents of revival” of the party. (PTI)