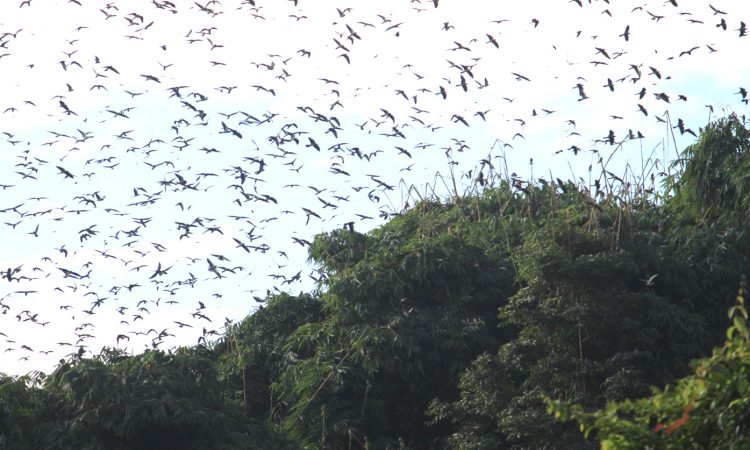 Dimapur, November 3: Amur Falcon (Falco amurensis) has returned to its favored roosting site at the Yaongyimchen Community Biodiversity Conservation Area under Longleng District. The falcons called as ‘Tuma Loih’ in local dialect of Yaongyimchen started arriving in batches since October second week and is gradually increasing every day.
It appears that the numbers are more this year, informed a release issued by the Lemsachenlok Society.
Since 2010, Lemsachenlok Society of three villages, Yaongyimchen, Alayong, Sanglu have been initiating the biodiversity conservation, setting aside a huge forest area as Community Biodiversity Conservation area and today it gives asylum to hundreds of flora and fauna.
The release said conservation in the three villages is a very unique initiative, because the community took a surrendering initiative by shifting their regular jhum fields to different locations in order to provide a conducive eco system for the Amur Falcons which comes all the way from Mongolia, feed on flying termites and other insects as they energize their strength before they take 5 days and 5 nights continuous flight down to South Africa for the winter.
The entire community consisting of Yaongyimchen, Alayong, Sanglu village enthusiastically kicked off its preparation for the Amur Falcon homecoming beginning from the month of October. Volunteers have been alternatively keeping a vigil in and around the entire village jurisdiction while the women have been engaged in cleaning the surroundings and the men in making renovations and construction of watchtowers, it informed.
Amur Falcon is protected under the Wildlife Protection Act, 1972 and the Convention on Migratory Species. It is also listed on Appendix II of CITES. Based on this act and also the resolution adopted by the citizens in 2010, the village councils in its joint meeting on November 2 reaffirmed to protect the falcons during their short stay and prohibit any activities that will harm the ecosystem especially the Amur Falcons within its jurisdiction.
While there are several roosting sites in the State, the joint meeting resolved that patrolling within the entire village jurisdiction especially the roosting site of the community will be conducted and anyone caught indulging in the act of distracting the biodiversity, especially Amur Falcons, in any manner within its jurisdiction will be dealt with according to its resolution.
(Page News Service)

Fire razes one house in Dimapur