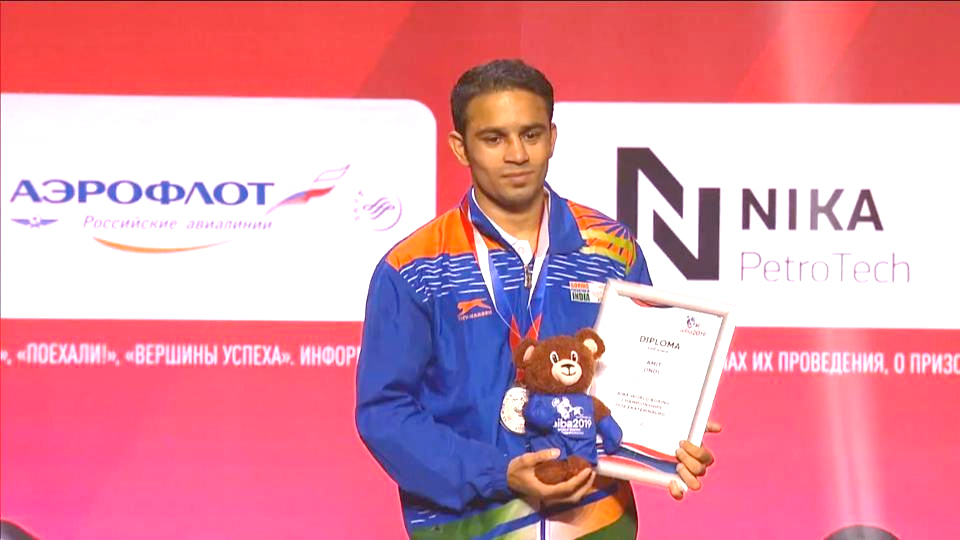 EKATERINBURG (Russia), September 21: Indian boxer Amit Panghal’s phenomenal campaign in the men’s world championships ended with a silver medal after he went down to Olympic champion Shakhobidin Zoirov of Uzbekistan in an intense 52kg category final on Saturday.
Panghal lost 0-5 but the scoreline was hardly a reflection of the fight he put on against the more fancied Zoirov.
The second-seeded Panghal became the first Indian male boxer to finish second in the world event and the country achieved its best ever medal haul of two. Manish
Kaushik (63kg) had signed off with a bronze earlier, after losing in the semifinals.
Once again up against a taller and more muscular opponent, Panghal gave it his all but fell short when it came to connecting accurately. The Asian Games and Asian Championships gold-medallist nonetheless achieved a historic feat.
The silver here marks a new high for the boxer from Rohtak, who has been simply unstoppable since breaking into the national scene with a bronze in the 2017 Asian Championships.
Zoirov, despite being unseeded here, was always going to be a tough challenge as he also has to his credit silver medals in the Asian Games and the Asian Championships.
Before this year, India had never won more than one bronze medal at a single edition of the world championship.
The past medal-winners at the big event are Vijender Singh (2009), Vikas Krishan (2011), Shiva Thapa (2015) and Gaurav Bidhuri (2017).
This time, India was among nine countries, out of a total of 78, which had their boxers in the finals. Uzbekistan topped the finalists count with four boxers. (PTI)