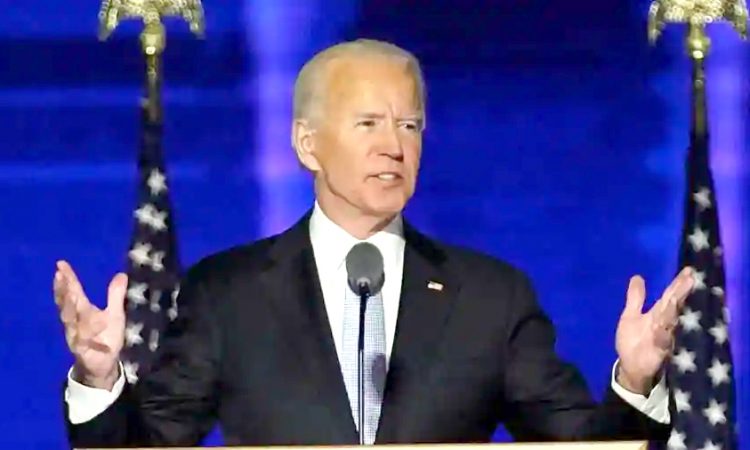 WASHINGTON, NOVEMBER 11: US President-elect Joe Biden said on Tuesday he told world leaders calling to congratulating him that “America is back”, signalling the country’s return to increased global engagement in a reversal of President Donald Trump’s isolationism driven by his ‘America First’ motto.
“I’m letting them know that America is back. We’re going to be back in the game,” Trump said in his first news briefing after his election.
These were also Biden’s first remarks aimed at foreign nations, some of whom have welcomed his election such as the UK, France, Germany and India, while others such as China, Brazil and Russia haven’t.
Moscow has said it wanted President Trump to exhaust his legal options.
Biden repeated his message to the world in a tweet later: “When I’m speaking to foreign leaders, I’m telling them: America is going to be back. We’re going to be back in the game.”
Biden has spoken with leaders of 5 countries over the past 2 days, all close and traditional allies of the United States: Canada’s Justin Trudeau, France’s Emanuel Macron, Germany’s Angela Merkel and UK’s Boris Johnson and Ireland’s Michael Martin. He will be speaking to more over the coming days.
Biden ran on the promise of restoring America’s role and leadership in global affairs. “And in order to lead again, we must restore our credibility and influence,” said his vision statement for his presidential campaign.
“From day one of a Biden administration, other countries will once again have reason to trust and respect the word of an American President.”
Biden also sought to allay concerns at home about roadblocks being placed by the Trump administration in the smooth transfer of power, as is the tradition.
But he said the President’s refusal to concede was an “embarrassment, quite frankly” and it “won’t help his legacy”.
Biden’s transition team was already at work and the President-Elect said he expected to name “at least a couple” of members of his cabinet before Thanksgiving, November 26.
The Trump administration has refused to engage with Biden’s transition team, blocking funds and denying intelligence briefings among other things. And the President has continued to press allegations of election fraud and file lawsuits, none of whom have had any serious impact. He has also insisted in falsely claiming he won the election.
Secretary of State Mike Pompeo, a close ally of the President, took it further. “There will be a smooth transition to a second Trump administration,” he told reporters at a briefing. He sought to walk it back later, faced with growing blowback. “We’ll have a smooth transition and we’ll see what the people ultimately decided when all the votes have been cast,” he said on Fox News when asked if he was joking earlier.
President-elect Biden laughed off Pompeo’s partisan remarks at his own news conference. He had had very reassuring calls with world leaders.
He described their response ~ “very fulsome and energetic” and added “I feel confident that we’re going to be able to put America back in a place of respect that it had before”.
Tackling COVID-19 and climate change figured in Biden’s conversations with all leaders, according to a readout issued by the transition team.
Under Biden, the US could rejoin the Paris Accord on tackling the climate crisis, though it was not mentioned. US ties with NATO and EU came up in discussions with Macron, Merkel and Johnson.
Biden and Macron also discussed Iran’s nuclear programme. No details were available but the French President had personally tried hard to persuade Trump to not leave the Iran deal, which he did.
Biden’ vision statement had indicated the possibility of resurrecting the deal. “If Tehran returns to compliance with the deal, President Biden would re-enter the agreement, using hard-nosed diplomacy and support from our allies to strengthen and extend it, while more effectively pushing back against Iran’s other destabilising activities,” it had said. (Courtesy: HT)