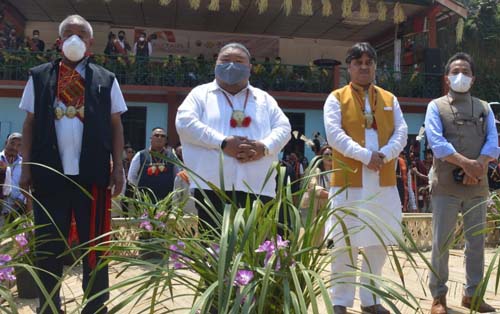 The event, which was organised by Konyak Union, had ENPO President Sashi Naga as Special Invitee and legislator N Thongwang Konyak as Chief Patron.
Along stated that Konyaks are one of the most fascinating tribes with the greatest warriors. He added that it was time for the Konyaks to move ahead as a tribe while also being instrumental in the progress of Nagas as a whole.
The Minister expressed desire for an inclusive Nagaland which was vibrant and strong. He urged the people not to be frustrated but rather contribute to enhance the collective strength for peace and prosperity in the land.
He further appealed to the people to “part with the past problems and anti-national elements”, and sow seed for a developed, educated, innovative and vibrant Nagaland in the name of Aoleang.
Advisor for IPR, SCERT and Village Guards, Toshi Wungtung stated that Aoleang was a thanksgiving festival. He urged the Konyak people not to lose their culture, tradition and unity.
Thongwang Konyak stated that Aoleang was celebrated to seek blessings for good harvest and to part with the past.
DC Mon, Thavaseelan K stated that the greatness of a culture or society lies in its festival. He appealed to the people to reconnect with the past for a better future and to live a life of compassion and humanity.
President ENPO, Sashi Naga urged the people to celebrate various festivals in a true and dignified manner.
(Page News Service)

Relaxation of qualifying years of service for promotion as HoD