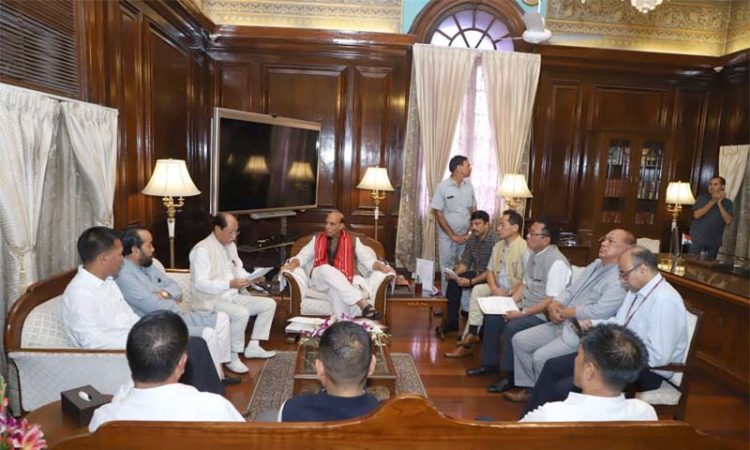 Kohima, September 10: An all party delegation today called on the Union Home Minister, Rajnath Singh to apprise him of the current situation in the State after it was battered by incessant rain.
The all party MLA delegation was led by Chief Minister, Neiphiu Rio. The ruling Progressive Democratic Alliance (PDA) consists of NDPP, BJP, JD(U), NPP and one independent. The Opposition NPF has 26 legislators.
Sources said the delegation briefed Rajnath about the current situation in the State and sought Union Government’s intervention to mitigate the suffering of the people due to rain which has caused extensive damages to roads and properties worth crores of rupees.
Chief Minister Neiphiu Rio apprised Rajnath Singh about the damages caused due to natural calamities and urged for central assistance under NDRF and interim aid to mitigate the ongoing relief and restoration works.
The State Government has also sought over Rs 700 crores to repair and refurbish the damages; so far the Centre has not sanctioned any amount. Recently a ministerial team was in the State to assess the damages.
The Union Government is yet to announce relief for Nagaland despite repeated appeal from the State Government. One reason could be that such relief funds were never properly utilized for the targeted people in the past.
The delegation also requested for sanctioning of developmental projects in Eastern Nagaland as a follow up to an earlier request which had also been made to the Prime Minister on August 7 last.
Besides this, delegation also requested for modernization and upgradation of Village Guards in Nagaland. Rio further requested Rajnath Singh for sanctioning another helicopter to increase flying hours for Nagaland particularly for far flung areas of the State.
The Chief Minister also highlighted the various projects under the restructured North East Special Infrastructure Development Scheme (NESIDS) and urged the Home Minister who is also chairman of the North Eastern Council for sanction of the proposed projects.
On his part, the Union Home Minister assured to look into the issues and also discuss the matter with DoNER Minister to accelerate the sanctioning of the proposed projects.
Rio was accompanied by Deputy Chief Minister Y. Patton, and a delegation of the Eastern Nagaland Legislators’ Union (ENLU) comprising of Minister H&FW S. Pangnyu Phom, Minister, Transport, Civil Aviation and Railways, P Paiwang Konyak, Minister Soil & Water Conservation Kashiho Sangtam, Advisor SCERT Toshi Wungtong, Advisor DUDA Bongkhao Konyak including MLAs EE Pangteang and CL John.
The delegation is expected to meet other Central leaders. (Page News Service)