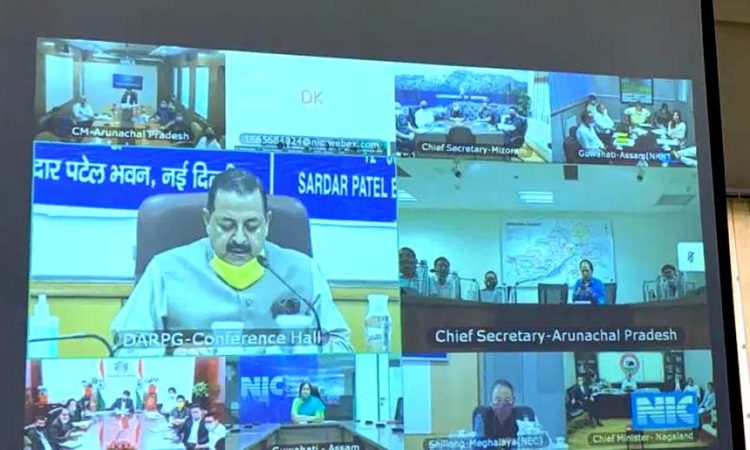 New Delhi, June 12: Union minister Jitendra Singh said on Friday the e-office project, to be implemented in all northeastern states, will fulfil the vision of minimum government, maximum governance and boost transparency and citizen-centric delivery mechanism.
Addressing a webinar attended by chief ministers and information technology ministers of the northeastern region, Singh said computerisation of government work is a cardinal pillar of ‘Digital India’ and 55 central government ministries have implemented the project.
He assured all technical and financial support for the project implementation from civil secretariat to the district level in all the states, according to a statement issued by the Personnel Ministry.
He said the e-office project will fulfil the vision of Prime Minister Narendra Modi of minimum government, maximum governance and will ensure ease of administration, and improve transparency and citizen-centric delivery mechanism.
Singh, the minister of state for personnel, also announced a joint steering committee to be chaired by the secretary of the Ministry of Development of North Eastern Region (DoNER) to take the project forward.
Representatives from Department of Administrative Reforms and Public Grievances (DARPG), Ministry of Electronics and Information Technology, National Informatics Centre, North Eastern Council and all the eight northeastern states will be the part of the Committee to suggest measures and implement the e-office project.
The eight northeastern states are Assam, Sikkim, Arunachal Pradesh, Nagaland, Manipur, Mizoram, Tripura and Meghalaya.
Singh said the progress of e-office in 75 central ministers/departments enabled the creation of a digital central secretariat which ensured that work from home was possible during lockdown.
The implementation of e-office in state secretariats of northeastern states will result in creation of paperless state secretariats in a time-bound manner where officers would be empowered with virtual private networks, digital signature certificates and promote less contact governance, the statement said.
The webinar was attended by chief ministers of Arunachal Pradesh, Nagaland, Sikkim and Meghalaya and the IT ministers of Assam, Manipur, Mizoram, and Tripura.
Chief secretaries of these states, additional chief secretaries and principal secretaries of administrative reforms and secretaries of IT departments also attended the workshop.
Altogether 220 people participated in today’s webinar, it said.
The chief ministers and the states’ IT ministers in their presentation pointed out the infrastructure bottlenecks like network connectivity and lack of funds to implement the e-office project, which the Union minister said would be looked into seriously.
In his opening remarks, DARPG Secretary K Shivaji said the entire northeastern region has the natural advantage of IT-savvy youth power to implement the project.
Shivaji also conducted a technical session before the webinar was addressed by the Union minister.
In his remarks, DoNER secretary Inder Jit Singh said DoNER is the first central government ministry to implement 100 percent e-office in processing of files.
The e-workshop was also attended by V Srinivas, Additional Secretary DARPG, Jaya Dubey, Joint Secretary DARPG and other officials. (PTI)