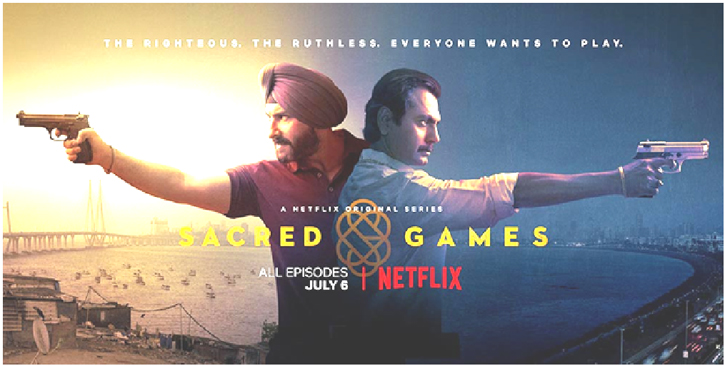 Akali Dal leader Manjinder Singh Sirsa has demanded that a scene from Netflix’s Sacred Games season 2 should be deleted immediately as it hurts Sikh religious sentiments. The scene shows Sartaj Singh, played by Saif Ali Khan, throwing away his ‘kada’, considered a religious symbol by the faith.
In a series of tweets, Sirsa also urged Union Minister of Information and Broadcasting Prakash Javedkar to take legal action against Netflix and Sacred Games season 2. He also tweeted against director Anurag Kashyap, who incidentally didn’t direct scenes starring Saif.
“I wonder why Bollywood continues to disrespect our religious symbols! Anurag Kashyap deliberatly puts this scene in #SacredGamesS2 where Saif Ali Khan throws his Kada in sea! A KADA is not an ordinary ornament. It’s the pride of Sikhs & a blessing of Guru Sahib @NetflixIndia @ANI,” Sirsa wrote, adding, “Why was the main character made Sikh if you didn’t do any research on the identity of Sikhs & how 5 kakaars (including Kada) are quintessential for Sikhs @NetflixIndia I demand removal of this scene asap or we will take legal action against the production team.”
He also asked the I&B ministry to take action as the show ostensibly hurts religious sentiments of Hindus and Sikhs, “I urge @PrakashJavdekar Ji to take stern action agnst @NetflixIndia & #SacredGames which disrespects not only Sikh Kakaars but Hindu religion symbology also These people are minting money hurting our religious sentiments which cant be allowed in the name of Freedom of Expression.”
The first season of Sacred Games had also led to controversy for derogatory portrayal of former Prime Minister Rajiv Gandhi. His son Rahul Gandhi, however, had defended the show’s freedom of speech. “My father lived and died in the service of India. The views of a character on a fictional web series can never change that,” he had tweeted.
Sacred Games 2 started streaming on Independence Day. The much awaited show stars Nawazuddin Siddiqui, Pankaj Tripathi and Kalki Koechlin, besides Saif. Directed by Kashyap and Neeraj Ghaywan, it has Vikramaditya Motwane as the showrunner.