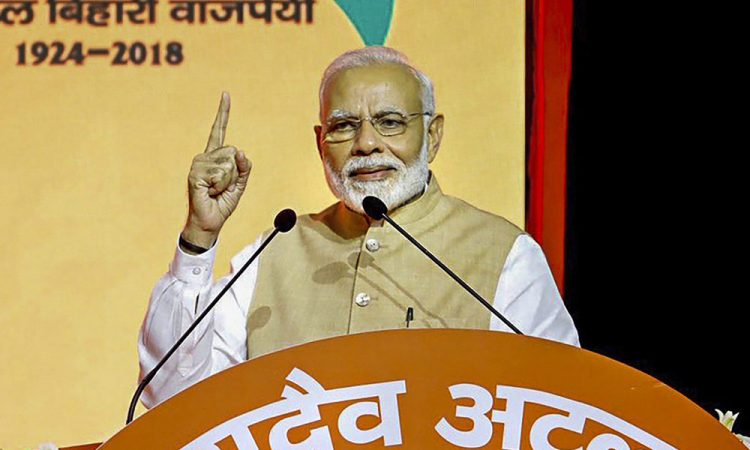 NEW DELHI, September 9: Prime Minister Narendra Modi on Sunday gave a clarion call to BJP workers with the slogan “Ajay Bharat, Atal BJP” and targeted the opposition’s “opportunistic efforts” to form a “mahagathbandhan” at the party’s national executive meeting in New Delhi.
Giving the slogan of ‘Ajay Bharat, Atal Bhajapa’ (Invincible India, firm BJP), Modi exuded confidence that his party will win in 2019. “We have started our journey with confidence of victory. We enjoy the confidence of 125 crore people of India.”
Taking a swipe at opposition parties for trying to cobble together a grand alliance, PM Modi said that such efforts are a “vindication of BJP’s work”.
“People who do not see eye to eye are thinking of a grand alliance. It is vindication of our work,” said PM Modi.
Describing the ‘mahagathbandhan’ in his own words, Modi said, “Netritva ka pata nahi, niti aspashth, niyat brasht (Clueless on leadership ,unclear on ideology, and nurturing corrupt intentions).
Launching a scathing attack at the Congress, PM Modi said that the party could not even succeed in its role as an opposition.
“We do not see any challenge,” he said, lashing out at the opposition over its allegations based on “falsehoods and lies” against his government.
He further remarked that BJP’s 48 months in power are better than 48 years of Congress’ rule.
“Question our work and we will be willing to fight. Compare the 48 years of their rule and 48 months of our government and then judge,” Modi said.
He emphasised the importance of the party’s ideology and said that BJP has both strategy and principles. “We have principles and strategy. Principles remain firm and strategies keep changing from time to time,” Modi said.
He said his government has lived up to the slogan of ‘sabka saath, sabka vikas’ by bringing development to all without any consideration of caste, religion or region.
Mocking Rahul Gandhi without naming him, Modi said nobody, including small parties, is ready to accept the Congress’s leadership.
“Some even consider it a burden. There are some within it (Congress) who are not in a position to accept the leadership,” he said.
The opposition has not challenged the government on issues or its policies and ideology, but manufacture lies every day and keeps repeating them, he said, apparently in reference to its attack on him over issues of corruption in the Rafale deal and demonetisation among others.
Asking his party to bust the opposition’s “lies and falsehoods”, he said the Congress nationalised banks and mines claiming that it will help the poor and then changed track in the name of reforms.
It is important to ask what benefits the poor got during the period, he said.
The world, Modi said, is discussing policies of his government based on “sabka saath, sabka vikas”.
He spoke of the intensive drive to cover the poor households, especially in villages with high concentration of scheduled castes and tribes, with LPG connections, electricity and insurance cover among other welfare measures.
Meanwhile, party chief Amit Shah, who also spoke at the meeting, asserted that BJP will remain in power for 50 years after emerging victorious in next year’s Lok Sabha polls.
“We will win 2019 polls and nobody will be able to remove us for the next 50 years after that. We are not saying this out of pride but on the basis of our work,” Shah said. (Agencies)