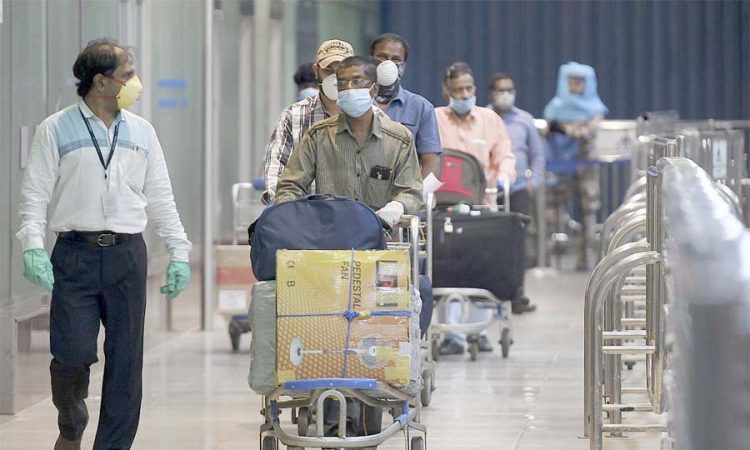 New Delhi, May 21: A day after the Government announced the recommencement of domestic commercial flight operations from May 25, the Airports Authority of India (AAI) on Thursday issued the Standard Operating Procedures (SOP) to all its airports.
Civil Aviation Minister Hardeep Singh Puri had on Wednesday announced that domestic flights will recommence in a “calibrated manner” from Monday, two months after commercial airlines ceased operations in view of the Coronavirus pandemic.
The minister had further asked all airports and air carriers to be ready for operations from Monday.
As per the Standard Operating Procedure (SOP), all passengers must compulsorily be registered with the Aarogya Setu app on their phones and the same will be verified by the airport CISF staff at the entry gate, However, Aarogya Setu is not mandatory for children below the age of 14.
State governments and local administration have been asked to ensure availability of proper public transport and private taxis for providing connectivity to the airport for passengers as well as airport and airline staff.
The SOP further stated that kerb area, city side traffic and car parking area needs to be strictly monitored with coordination with traffic police and CISF staff to prevent congestion and to maintain social distancing.
For commuting to and form the airport, both by staff and passengers, only personal vehicles or select authorised taxi services with restricted seating are to be permitted.
The passengers have to reach the airports well in advance, i.e. two hours before the schedule time of departure and passengers who have departure in next four hours will only be allowed to enter the terminal building. All travellers are required to wear protective gear such as mask, gloves etc.
Passengers must compulsorily walk through screening zone for thermal screening at a designated place in the city side before entering the terminal building. Flyers not showing “Green” on Aarogya Setu app will not be allowed to enter the airport.
Meanwhile, there is no information yet on international airline operations.
While the government and airlines had been talking about fewer passengers after the lockdown, Civil Aviation Minister Hardeep Singh Puri on Wednesday made it clear that it would not be possible to keep the middle seat vacant, one of the suggestions for ensuring physical distancing to avoid the Coronavirus infection.
“It’s not viable to keep the middle seat vacant. Even if you keep the middle seat vacant you’ll still have a situation where the prescribed distance for social distancing isn’t followed. If you were to do it then you’ve to hike up airline ticket price by 33 per cent,” the minister was quoted as saying by ANI.
Meanwhile, the Civil Aviation minister is set to hold a press conference at 3 pm today, to share more details about the standard operating procedure for airports, airlines and passengers.
In an unprecedented measure to check the spread of COVID-19 coronavirus disease, operations of domestic scheduled commercial airlines had been suspended on March 25.
The next day, all scheduled international commercial passenger services were also suspended.
However, cargo flights, offshore helicopter operations, medical evacuation flights and special planes permitted by Indian aviation regulator DGCA were allowed to operate during the lockdown.
Airlines have suffered huge losses since various countries stopped flights in their fight against the pandemic. Airlines have either slashed salaries or asked employees to go on a sabbatical without pay. (Agencies)