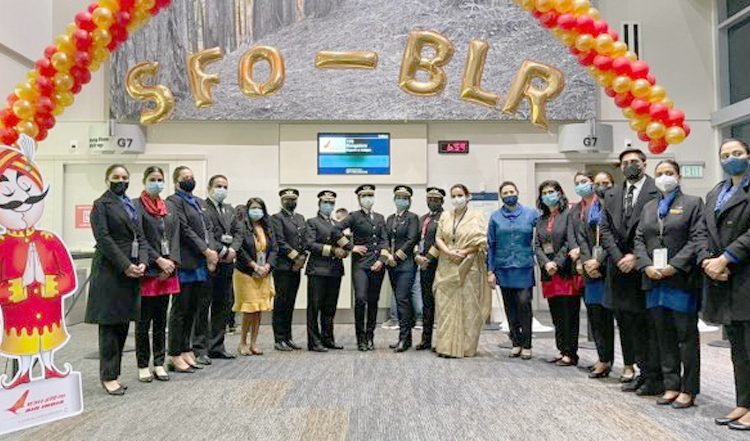 Bengaluru, January 10: An all-women cockpit crew set out on a history journey, operating Air India’s inaugural San Francisco-Bengaluru flight, going over the North Pole and taking the Atlantic route to reach the Karnataka capital at the other end of the world.

The flight number AI176 left San Francisco on Saturday at 8.30 PM (local time) and would arrive in Bengaluru at 3.45 AM on Monday, according to Air India sources.
Union Minister for Civil Aviation, Hardeep Singh Puri tweeted, “Way to go girls! Professional, qualified & confident, the all women cockpit crew takes off from San Francisco to Bengaluru on @airindiain’s flight to fly over the North Pole. Our Nari Shakti achieves a historic first.”
The total flight time on this route will be more than 17 hours depending on the wind speed on that particular day, it had said in a statement on the eve of the historic flight.
Members of the crew are: Captain Zoya Aggarwal, Captain Papagari Thanmai, Captain Akansha Sonaware and Captain Shivani Manhas.
Air India too expressed its elation when it tweeted, “Imagine this : -All Women Cockpit Crew. -Longest flight into India. -Crossing the North Pole It’s here & happening! Records broken. History in the making by AI176 from @flySFO to @BLRAirport. AI 176 is cruising at 30000 feet.” (PTI)

Will poor and underprivileged get COVID-19 vaccine for free? asks Congress