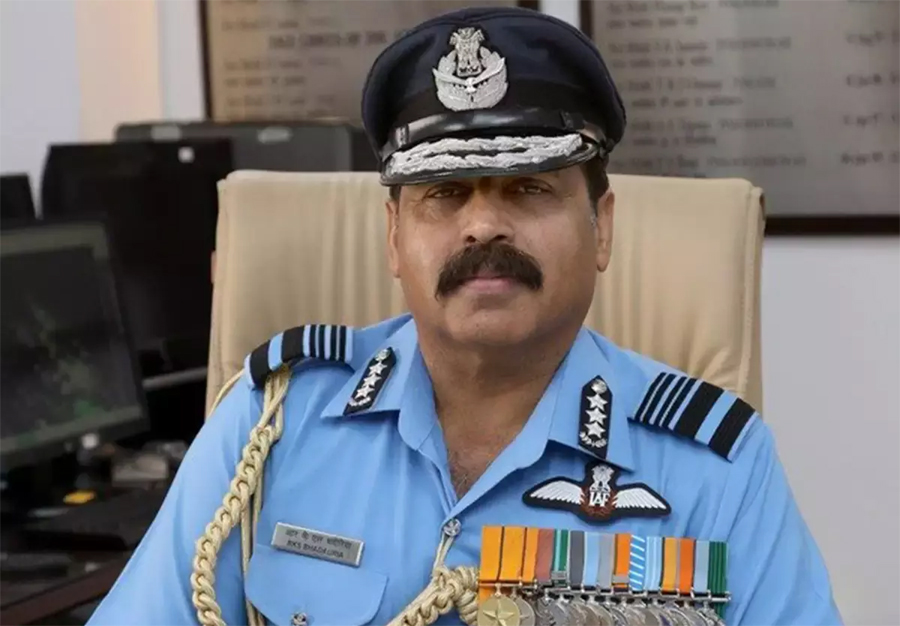 New Delhi, September 3: Chief of Air Staff Air Chief Marshal RKS Bhadauria reviewed the Indian Air Force’s operational preparedness along the Line of Actual Control (LAC) in Arunachal Pradesh and Sikkim amid escalating border tensions with China, officials said on Thursday.
“Air Chief Marshal Bhadauria visited frontline air bases in Eastern Air Command (EAC) on Wednesday,” an IAF spokesperson said without mentioning the names of the air bases.
The Eastern Air Command, headquartered in Shillong, looks after the aerial defence of sensitive areas along the LAC in Sikkim and Arunachal Pradesh as well as various other parts of the region.
The Army and the Indian Air Force have increased their alert levels in all key bases along the nearly 3,400 km-long LAC following China’s fresh attempts to change the status quo in the Southern Bank of Pangong lake in eastern Ladakh.
The IAF spokesperson said the Chief of Air Staff was briefed about the “state of readiness” and operational preparedness of the combat units under the command.
“Air Chief Marshal Bhadauria also met and interacted with air warriors serving in these units during the course of his visit. He lauded the focussed efforts by the station personnel towards maintaining proficiency in all roles envisaged and urged them to continue performing their duty with due diligence,” the official said.
The IAF Chief has been regularly visiting key air bases along the LAC since the border row broke out between Indian and Chinese troops in eastern Ladakh in early May.
In June, Air Chief Marshal Bhadauria made a quiet visit to Ladakh and Srinagar air bases to review the IAF’s overall preparedness.
In the last two months, the IAF deployed almost all its frontline fighter jets like Sukhoi 30 MKI, Jaguar and Mirage 2000 aircraft in the key frontier air bases in eastern Ladakh and elsewhere along the LAC.
The IAF has also deployed Apache attack choppers as well as Chinook heavy-lift helicopters to transport troops to various forward locations in the region.
On Monday, the Indian Army said the Chinese military carried out “provocative military movements” to “unilaterally” change the status quo on the southern bank of Pangong lake on the intervening night of August 29 and 30 but the attempt was thwarted by the Indian troops.
External Affairs Ministry Spokesperson Anurag Srivastava on Tuesday said the Chinese People”s Liberation Army (PLA) was engaged in “provocative action” again a day earlier when the ground commanders of the two sides were holding talks to ease the situation. (PTI)