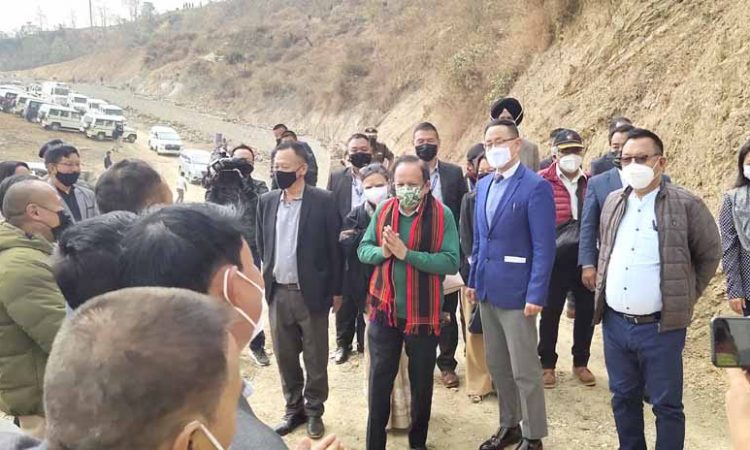 KOHIMA, FEBRUARY 27: Union Minister for Health and Family Welfare, Dr. Harsh Vardhan on Saturday informed that the government is targeting completion of the first medical college project in Nagaland by 2021 end, and other amenities by mid-2022.

Interacting with media persons during his visit to the construction site of Nagaland’s first medical college under Kohima village here, the union minister said that the project was delayed due to land ownership issues, which has now been resolved at the village-level. The foundation stone for the medical college was laid in 2014 by Chief Minister Neiphiu Rio.
“I look forward to come back again and see that the medical college is completed as early as possible, while the Nagaland Minister for Health S Pangnyu Phom will personally review the whole thing along with the Secretary for Health. The Centre will also keep in touch with the State government and the Health department regularly for faster pace of works,” he said.
For the second medical college in Mon, Vardhan said that the construction activities should start at the earliest so that there is no delay in its progress.
He recollected that the second medical college of the State was passed in the second term of the Narendra Modi government after taking into consideration areas which were either aspirational districts or where people did not have basic healthcare facilities even after 75 years of Independence.
“We want that the people there should be benefitted and avail the healthcare services and medical education for their children,” he said.
Simultaneously we are also trying to develop the health and wellness centres all over the country, including Nagaland, the union minister said.
Assuring to personally keep in touch with the State government for early completion of the two major health projects in the State, Vardhan said that the Centre is committed to improving the healthcare infrastructure and healthcare services all over the country.
“This year’s budget has a huge increase in healthcare spending and systems like availability of potable water, sanitation, nutritional issues which will contribute to strengthening the cause of providing good health to the people,” he said.
Vardhan declined to respond to a query on a possible solution to the vexed Naga political dialogue between New Delhi and Naga negotiating groups, which has been a growing demand of the Naga people alongside infrastructural developments.
The Nagaland Legislative Assembly had, on February 16, passed a four-point resolution urging the government of India and the Naga political groups to sit across the table for conclusion of the political negotiation that is honourable, inclusive and acceptable to the people as “one solution” without any further delay.
‘New Northeast’ by 2022
The union minister asserted that the BJP-led NDA government at the Centre would deliver a new India and a new Northeast by 2022 Independence Day celebration.
Vardhan said that Prime Minister Narendra Modi has a huge commitment for up-scaling and upgrading the existing infrastructure of all sectors in NE states.
“There is a huge focus of all the central departments…it is not only about Health and Family Welfare but issues related to connectivity by road, rail or by air. Almost all fronts, including education, are given emphasis to ensure Northeast has as much development as the rest of the country. I assure that the Northeast will see many more and much more things happening than that have happened in the last five-seven years under Prime Minister Modi,” he said.

Later, the union minister visited the World War-II cemetery completing, his three-day official tour in Nagaland.
At the cemetery, he paid homage to the Indian and British soldiers who had sacrificed their lives while fighting in the famous Battle of Kohima in 1944. He also laid a wreath at the War Memorial.
Vardhan, along with his wife, left for Imphal in Manipur on Saturday.
(Page News Service)