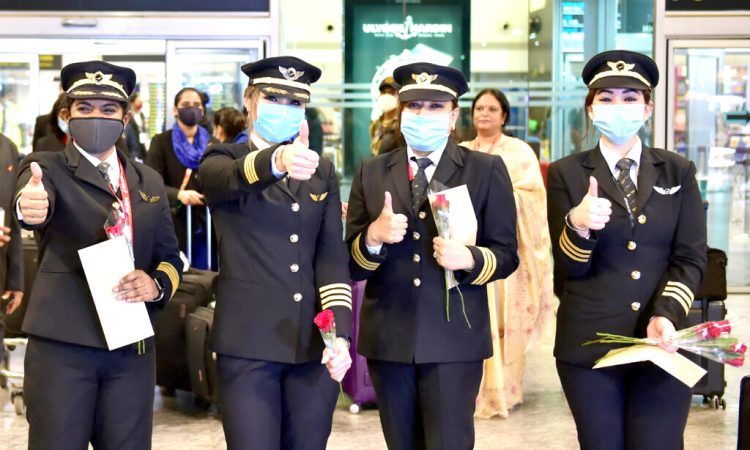 Bengaluru, January 11: Creating history, Air India’s Longest flight from San Francisco to Bengaluru with an all- woman crew landed in the city on Monday.
As the flight (AI-176) landed at the Kempegowda International Airport in Bengaluru and the crew members walked to the airport lounge, there was a huge crowd of people to receive them with elation and joy for setting a new record of an all-woman crew flying the longest distance over the North Pole.

Air India had said earlier this will be the longest commercial flight in the world to be operated by it or any other airline in India.
The direct distance between the two cities at opposite ends of the world is 13,993 km with a time zone change of around 13.5 hours.
Amid the cheers and clapping, the four women-Captain Zoya Aggarwal, Captain Papagari Thanmai, Captain Akansha Sonaware and Captain Shivani Manhas- responded by showing the thumbs up sign.
Sporting a black uniform and donning the Air India’s cap, the women were received at the airport by the Air India team members which had put out a banner reading, “A warm welcome to our guests on the inaugural flight of AI 176, January 11, 2021 — San Francisco to Bengaluru.”
Union Minister for Civil Aviation, Hardeep Singh Puri tweeted, “In a moment to cherish & celebrate, women professionals of Indian civil aviation create history. Heartiest Congratulations to Capt Zoya Aggarwal, Capt Papagari Thanmai, Capt Akansha Sonaware & Capt Shivani for flying over North Pole to land in Bengaluru from San Francisco.”
Air India too greeted the crew members by tweeting: “Welcome Home Capt Zoya Agarwal, Capt Papagari Thanmei, Capt Akanksha & Capt Shivani after completing a landmark journey with touchdown @BLRAirport. Kudos for making Air India proud. We also congratulate passengers of AI176 for being part of this historic moment.”
The San Francisco Airport authorities too rejoiced in the success.
They tweeted, “Congratulations @airindiain on a historic flight! Flight AI176 was piloted by an all female cockpit crew for the landmark journey from #SFO over the North Pole to @BLRAirport.”
Flight AI176 departed from San Francisco in the USA at around 8.30 pm (local time) on Saturday and landed at the Kempegowda International Airport at around 3.45 am (local time) on Monday.
The total flight time on this route will be more than 17 hours depending on the wind speed on that particular day, it had said in a statement on the eve of the historic flight. (PTI)