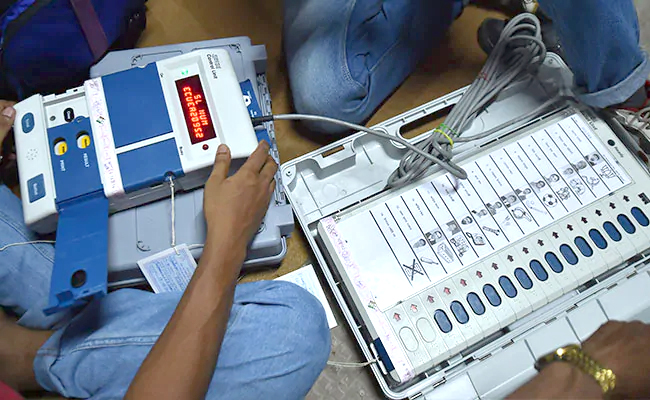 Election Commission asserted that EVMS are "absolutely robust and tamper-free"

Guwahati, December 6: Ahead of assembly polls in the state in March-April next year, political parties in Assam are battling it out in a semi-final to assume control of the Bodoland Territorial Council (BTC).

Polling for the council, which administers Bodoland Territorial Region covering Udalguri, Kokrajhar, Baksa and Chirang, will take place in two phases on Monday and Thursday. Counting of votes will take place on December 12.
Polling for 40 seats in the council, which comes under Sixth Schedule of the Constitution, scheduled in April was postponed due to Covid-19 and the area placed under Governor’s rule.
Since its formation in 2003, BTC had been governed by Hagrama Mohilary, a former rebel who now heads the Bodoland Peoples’ Front (BPF), a partner in the ruling coalition headed by the Bharatiya Janata Party (BJP) with the Asom Gana Parishad (AGP) as the third partner.
But relations between the BJP and the BPF started souring after BTC was placed under Governor’s rule. Both parties are now contesting the BTC polls separately. the BPF has fielded candidates in 37 seats while BJP is contesting 26 and supporting Independent candidates in the other seats.
The campaigning has been bitter and personal with senior minister Himanta Biswa Sarma accusing Mohilary of large-scale corruption and the latter terming the former a bully.
“There’s lack of development in BTC areas due to misrule of BPF. The large crowds at our rallies indicate the BJP will come to power in BTC this time,” Sarma said at an election rally in Udalguri district on Saturday, the last day of campaigning for the first phase of polling.
Hitting back, Mohilary said at an election rally: “Sarma can be a bully in Dispur, but he has no say in BTC. We are coming back to power again and the BJP’s plan to rule BTC will fall flat.”
Apart from the BJP and the BPF, opposition Congress and All India United Democratic Front (AIUDF), which have a tie-up for the assembly polls, are contesting total 20 seats.
The other prime contenders are United Peoples’ Party Liberal (UPPL), which is contesting all 40 seats and Gana Surakha Party (GSP) of Kokrajhar MP Nava Sarania, which is fighting in 35 seats.
The BTC polls would be the first election in Assam since the Covid-19 pandemic started and the administrative machinery and poll machinery are geared up to ensure smooth polling while maintaining all protocols.
“There are 11 constituencies in our district and nearly 700,000 voters. Polling parties have gone to their stations and security arrangements are in place for Monday’s voting. Face masks, sanitisers etc. have been provided to the poll officials and social distancing will be maintained during polling,” Ranjan Sarma, deputy commissioner of Baksa district said. (Courtesy: HT)