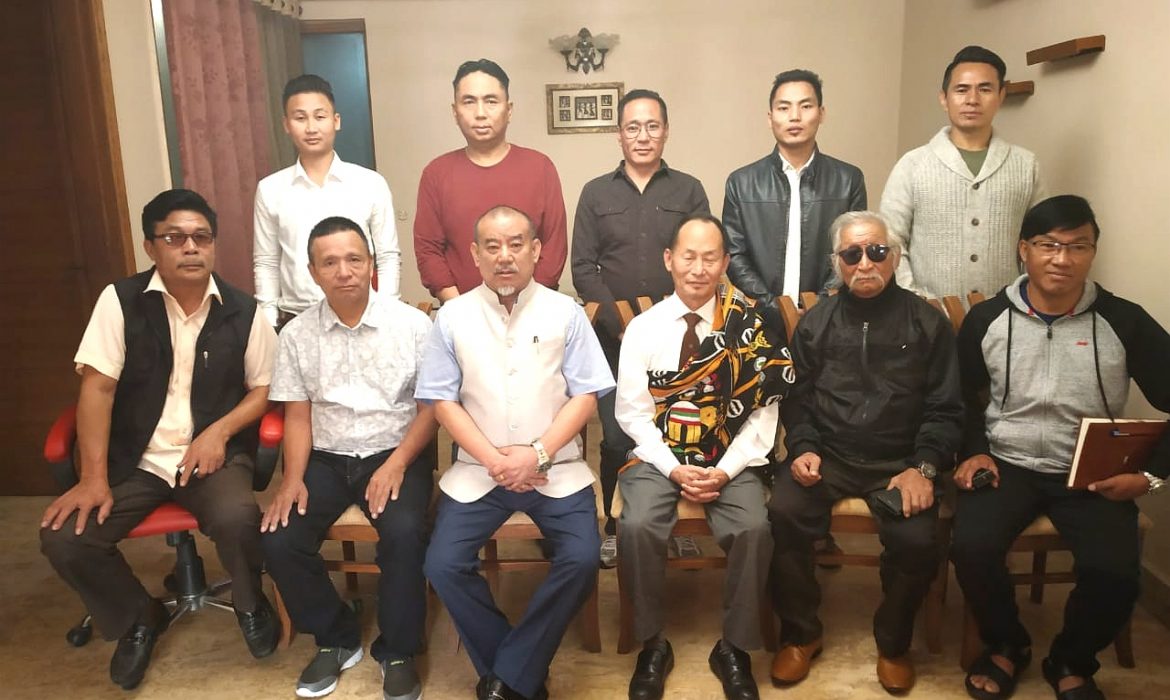 Dimapur, November 17: The Working Committee (WC) of the Naga National Political Groups (NNPGs) currently negotiating with Government of India held a thanksgiving programme at New Delhi to mark one year of signing of the ‘Agreed Position’ with GoI.
Convener, NNPGs WC and Ato Kilonser GPRN/NSCN, N Kitovi Zhimomi said the Naga political struggle is now entering a new phase.
The ‘Agreed Position’ or ‘Preamble’ was signed on November 17, 2017 between GoI and Nagas represented by WC. It reaffirmed the historical and political status in the highest pedestal, which future generation Nagas can consolidate and built upon.
In one year, GoI and WC have had almost 50 rounds of political negotiations. Every issue is being dealt most diligently in a practical manner, said a statement issued by the media cell, NNPGs WC.
“All glory and honor belongs to Almighty God. WC appreciate the Naga people for their solidarity and prayer support. The duty of NNPG leaders is to do God’s will and fulfil our people’s aspiration. Although the leaders arrived with different political thoughts, ideas and political principles, within months God forged the mindset of all the Naga leaders into one indestructible weapon, each meeting guiding the leaders to be patient, courteous, accommodative and humble. Now each one trusts the other, having strong belief in the finality of Almighty God over both GOIs guiles and Naga political aspiration,” said the statement.
Kitovi in the programme reminded the members that God knows and understands each NNPG leader’s heart irrespective of how sweet and convincing one may sound. “Naga people have undergone untold suffering in the past and every leader must own responsibility for the sufferings. In recent years, God is using many civil societies, hereditary custodians and intellectuals as his instruments, enabling the NNPGs to see reason as opposed to remaining in a self righteous state. These God anointed purposeful, determined men and women, possessing diverse intellectual countors, are breaking down barriers and removing all hurdles among the NNPG leaders. Naga political struggle is now entering a new phase,” he said.
Other leaders who spoke during the service were co-convener Y Wangtin Naga, president NSCN(R); co-convener Hozheto Z Chophy, general secretary NNC/GDRN; co-convener Kiumukam Yimchunger, president, NNC/NPGN; co-convener Toshi Walling, NNC (Parent Body). Co-convener Zopra Vero, Kedallo FGN, could not attend the service having gone homeward early for other duties.
NTC peace mediation convener and former NSF president Yesonu Veyie, who also attended the prayer programme, briefly reminded the suffering of our people in the past and how God has brought the leaders together to the present defining moment. He encouraged the Naga leaders to be strong in their faith because only God can work miracles for Nagas in His own way.
The programme was chaired by Alezo Venuh, co-ordinator WC. (Page News Service)