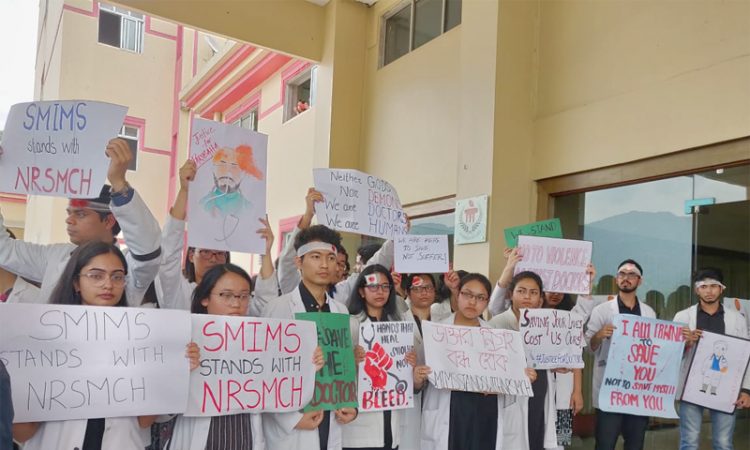 Kolkata, June 14: West Bengal Chief Minister Mamata Banerjee on Friday invited the agitating junior doctors for a meeting at the state secretariat, which they declined saying it is a ploy to break their stir.
She convened the meeting to find a solution to the ongoing impasse disrupting normal services at all state-run medical college and hospitals for four days.
After the protesting doctors did not turn up on Friday, Banerjee gave them time again at 5 pm on Saturday for the meeting at state secretariat Nabanna, senior physician Sukumar Mukherjee said.
Mukherjee along with other senior doctors, who were not part of the agitating medicos, went to meet Banerjee and held a two-hour-long meeting with the chief minister at the secretariat to find out a solution.
Banerjee then asked Director of Medical Education Pradip Mitra to invite three or four junior doctors to the secretariat for the meeting.
They, however, refused to go the meeting.
“This is a ploy to break our unity, our agitation. We will not attend any meeting at the state secretariat. The chief minister has to come here (NRS Medical College and Hospital) and deliver an unconditional apology for the manner in which she had addressed us during her visit to SSKM Hospital yesterday,” a spokesperson of the joint forum of junior doctors said.
While visiting the SSKM Hospital on Thursday, Banerjee had contended that outsiders had entered medical colleges to create disturbances and the agitation is a conspiracy by the CPI(M) and the BJP.
Mukherjee said the chief minister waited for the junior doctors to come to the state secretariat on Friday night and when they did not turn up, gave them another time for a meeting on Saturday evening.
“We hope some junior doctors will turn up,” he said.
“We had come to meet the chief minister on our own to find a solution to the impasse. She has briefed us about the steps her government has decided to take in fulfilling the demands of the junior doctors,” Mukherjee said.
Earlier, the Indian Medical Association (IMA) launched a three-day nationwide protest from Friday to express solidarity with the doctors agitating against the attack on their colleagues in West Bengal and called for a strike on June 17 with withdrawal of non-essential health services.
The apex body of doctors in the country also renewed its demand for a central law to check violence against health care workers in hospitals and said it should have a provision for a minimum of seven-year jail sentence to violators. (PTI)