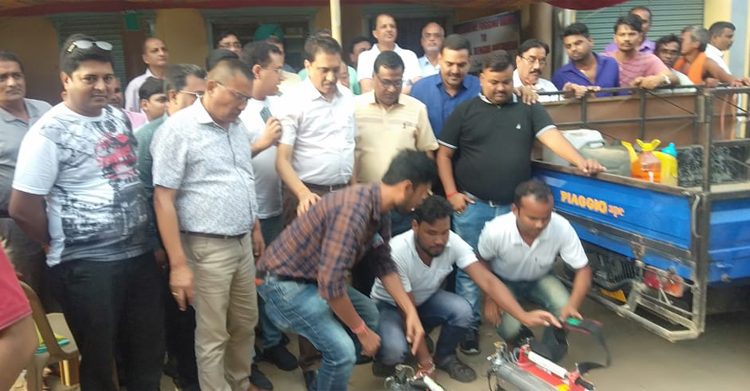 Dimapur, August 25: To contain the outbreak of Vector borne disease such as Malaria, Dengue, Japanese Encephalitis (JE), under the aegis of the Dimapur Shree Agarwal Mahasabha fogging was flagged off by Deputy Commissioner, Kevekha Kevin Zehol on Sunday near Durga Mandir.
Flagging off the 10-day fogging in Dimapur, DC Kevekha Kevin Zehol expressed happiness that Shree Agarwal Mahasabha has taken the initiative to start fogging in Dimapur which would lead to reduction of Vector borne diseases such as Dengue and JEs in the district and sought the cooperation of all the colonies GBs and Chairman and the general public in containing the outbreak of Malaria, dengue and JE. He urged all to assist the volunteers of the Fogging committee initiated by the Agarwal Mahasabha under the Chairmanship of Ramesh Agarwal.
He appreciated the Agarwal Mahasabha for undertaking fogging since the last four years stating that they had been doing great service towards the society.
Kevekha Kevin Zehol said, “We welcome the mosquitoes at our homes and surroundings, if we maintain cleanliness of our surroundings we can contribute a lot in preventing this fatal vector borne diseases. Drains and stagnant water collection points should be filled up. Prevention is better than cure and this is the fourth time that the Agarwal Mahasabha has been doing such a great job which all the other community organizations should also take up”.
The DC said helping people without letting them know that you are helping them is one of the greatest help which we all need to inculcate and devote our time and energy for the betterment of the society and the state.
Speaking on the occasion, Chandu Agarwal stated that since the last four years the Agarwal Mahasabha had been doing the fogging in the town areas of Dimapur.
He said, “Fogging does not always solve the problem, cleanliness is a must and requested all to maintain clean surroundings and maintain hygiene in public places too”.
Speaking on the occasion as Guest speaker, Dr. Imti of National Vector Borne Disease stated that in 2019 no positive cases of JE had been reported. Elisa test is being done to confirm whether one has been afflicted with JE, and till August 24 no cases has been reported which is a good sign and elaborated on the statistics of dengue, Malaria and JE cases reported and of the number of casualties in the state.
Dr. Imti said, “Malaria cases are coming down and it all depends on our cleanliness. Still the problems are increasing despite fogging, after monsoon it persists now and then. If we do not start fogging the danger increases and mosquitoes will keep on breeding and thousands and thousands eggs will be hatched per weeks. After fogging, mosquitoes cannot breed. Right now no cases had been reported but once it starts it gets viral”.
Dr. Imti further stated that the Dimapur Municipal Council (DMC) should take steps to clean all the drains and keep the town clean. It is too dirty and unhygienic and urged the gatherings to use mosquito nets and maintain cleanliness at home and in their work place.
The project Chairman of the Fogging Drive, Mahesh Agarwal stressed on the achievement of the Agarwal Mahasabha which had been carrying out fogging exercise since the last four years. He said, “With the cooperation of all fogging is starting from August 25 and we will try to complete the entire district within 3rd September”.
President of the Dimapur Marwari Samaj, Om Prakash Sethi urged the Deputy Commissioner to allot more time for fogging stating that few days are too less to cover the entire district.
Dr. Nitin Agarwal lamented on the unhygienic condition practiced by many people, dumping garbages here and there and also for not keeping their surroundings clean. He said, “Fogging is not the end in itself; we all need to do more than that. Let’s not give space to diseases”.
Dr. Nitin Agarwal stated that from today the fogging will take place in town area including Hong Kong Market, Murgi Patty, Dhobinala, G.S Road, Kalibari Road, Marwari Patty and M.P Road and also urged the general public to contact the Chairman and the Co-Chairman of the Fogging drive Ramesh Agarwal and Vikas Garg at their respective mobile numbers 9436012441 and 9436019075 for any assistances related to fogging.
Vice chairman Mahesh Agarwal delivered the vote of thanks
On the sideline of the Fogging drive, when Nagaland Page queried from the Deputy Commissioner why the district administration is not taking up the fogging exercise, the Deputy Commissioner said that he had requested the Rotary Club, Dimapur to take up the fogging drive and they had been successfully doing it.
When questioned further that Rotary Club Dimapur and Agarwal Mahasabha are private entities and they had been contributing a lot in this regard, why the district administration is failing to undertake fogging on a grand scale, Kevakha Kevin Zehol said, “The District administration in association with the District hospital had been undertaking fogging only in select locations where cases of JEs and dengue had been reported”.
The same was echoed by Dr. Imti of the NVBDCP, Dimapur. (Page News Service)