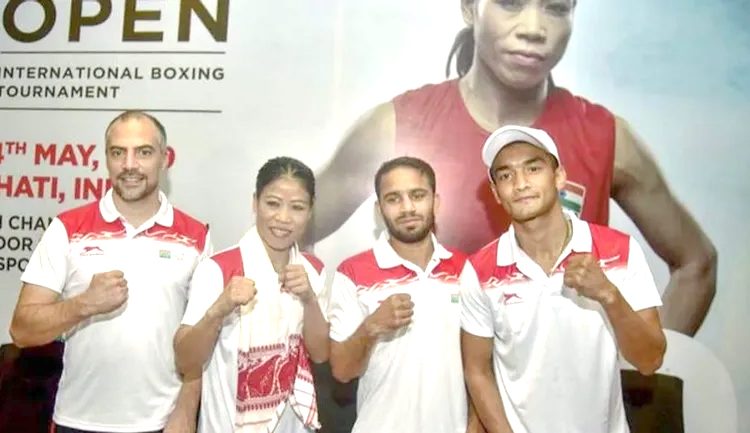 NEW DELHI, January 13: Their Olympic preparations back on track after the disruption caused by COVID-19, Indian boxers will be travelling extensively to compete in various European tournaments in the next couple of months starting with the prestigious Strandja Memorial in Bulgaria.

In a conversation with PTI, Indian boxing’s High Performance Director Santiago Nieva revealed that apart from an international schedule, he would also like to see the national championships take place some time before the Olympic Games.
“This year, we are starting with the Strandja Memorial in Bulgaria, then hopefully a tournament in Hungary and one more after that. Apart from this, we will be staying put at Bengaluru for the national camp and probably invite some foreign teams if they agree to come,” Nieva said giving a lowdown of the plans for the next six months.
Strandja Memorial is one of the oldest boxing competitions in the European circuit and is widely considered a season-opener. In its 72nd edition this year, it is scheduled to be held from February 21 to 28 in Sofia.
Nine Indian boxers — Amit Panghal (52kg), Manish Kaushik (63kg), Vikas Krishan (69kg), Ashish Kumar (75kg), Satish Kumar (+91kg), M C Mary Kom (51kg), Simranjit Kaur (60kg), Lovlina Borgohain (69kg), and Pooja Rani (75kg) — have qualified for the Olympics.
Some more may grab Tokyo tickets in the world qualifiers set to be held a month or two before the Games, postponed by a year to the current one owing to the COVID-19 pandemic. The Games are scheduled in July-August.
Speaking of the pandemic, Nieva said the disruption was expectedly frustrating but the Indians more than made up for the lost time during their two-month-long European sojourn in November-December during which they participated in two competitions as well.
“The SOP for COVID in the Patiala national camp barred sparring, so it was nice to get some sparring after a long break. It was much needed and it has helped us stay competitive and we are good now, back on track.”
After being halted completely because of the pandemic in March last year, the national camp had resumed in August in a controlled environment, open only for the Olympic-bound and Olympic prospects.
However, the boxers were not allowed to access the ring or spar for fear of infection, severely affecting their overall training regimen.
“The boxers needed competition for the sake of motivation and they got two during this Europe trip, it was a huge boost because the disruption had an impact. Not just us, every country has felt a setback and everyone has dealt with it differently,” Nieva elaborated.
The Swede said he wouldn’t mind a national championship before the Olympics as it would give crucial competition to boxers who are not in the camp and are starving for training and competition.
The convention in an Olympic year is to have the nationals after the quadrennial showpiece.
“If it is safe, then I would like to see the national championships soon. Perhaps in a bio-bubble, it would be great to keep boxers motivated because without competition, it is difficult to just go on training.
“I know it won’t be easy to have a bio-bubble given the numbers and scale of it but we can at least give it a thought and check if it is possible. It won’t be a bad idea,” he said.
“The likes of Brazil and China have had their Nationals, we can try too.”
The national championships could not take place last year because of the pandemic.
The boxers are currently in Bellary’s Inspire Institute of Sports, a high performance facility founded by JSW Sports and which has shooting ace Abhinav Bindra and former cricket captain Sourav Ganguly on its advisory board. (PTI)