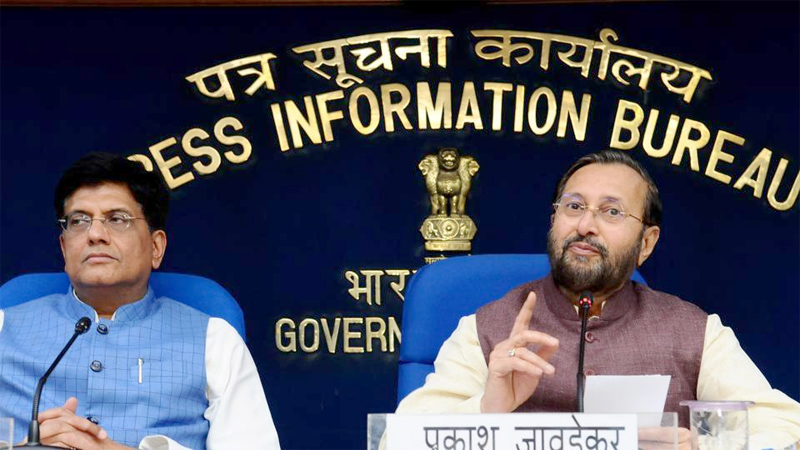 New Delhi, August 28: In a fresh round of FDI reforms, the government on Wednesday allowed 100% foreign investment in coal mining and contract manufacturing, eased sourcing norms for single-brand retailers and approved 26% overseas investment in digital media as it looks to boost economic growth from a five-year low.
Coming within a week of Finance Minister Nirmala Sitharaman unveiling a raft of measures to boost growth, the Union Cabinet headed by Prime Minister Narendra Modi liberalised foreign direct investment (FDI) rules in the four sectors.
“The changes in FDI policy will result in making India a more attractive FDI destination, leading to benefits of increased investments, employment, and growth,” Commerce Minister Piyush Goyal told a media briefing after the meeting of the Union Cabinet.
In the coal sector, now foreign players can invest 100% for mining and sale of coal under automatic route. They will also be able to carry out other associated processing infrastructure related to the sector such as coal washery, crushing, coal handling, and separation (magnetic and non-magnetic).
As per the present FDI policy, 100% overseas investments under automatic route was allowed for coal and lignite mining for captive consumption by power projects, iron and steel and cement units only.
“Further, 100% FDI under automatic route is also permitted for setting up coal processing plants like washeries subject to the condition that the company shall not do coal mining and shall not sell washed coal or sized coal from its coal processing plants in the open market and shall supply the washed or sized coal to those parties who are supplying raw coal to coal processing plants for washing or sizing,” an official statement said.
But, the decision is subject to provisions of Coal Mines (special provisions) Act, 2015 and the Mines and Minerals (development and regulation) Act, 1957.
The government also clarified that 100% FDI is permitted for contract manufacturing.
In the current policy, 100% FDI is allowed under automatic route in manufacturing sector but it was silent on contract manufacturing.
“In order to provide clarity on contract manufacturing, it has been decided to allow 100% FDI under automatic route in contract manufacturing as well,” the statement said.
Further, the government permitted 26% overseas investments through government approval route for uploading/ streaming of news and current affairs through digital media, on the lines of print media.
The present FDI policy is silent on the fast-growing digital media segment.
In the print media sector, 26% FDI is allowed through government approval route. Similarly, 49% is permitted in broadcasting content services through government approval route.
“FDI in digital media is a welcome development. Clarity around this fast growing segment of the media industry will act as an enabler for capital infusion. Significant value will be unlocked going forward,” Deloitte Partner Jehil Thakkar said.
Goyal said that 100% FDI in coal mining would help attract international players to create an efficient and competitive coal market.
In single-brand retail trading (SBRT), the definition of 30% local sourcing norm has been relaxed and online sales permitted without prior opening of brick and mortar stores.
“Online sales will lead to the creation of jobs in logistics, digital payments, customer care, training and product skilling,” he added.
On Friday, Sitharaman had announced tax incentives and some reforms for various sectors in an effort to stimulate slowing economic growth.
After rapidly expanding in last couple of years, India’s economic growth momentum has been slipping since the last 3-4 quarters. Not only did GDP growth fall to a 20-quarter low of 5.8% in January-March, telltale signs of distress are visible in sectors like NBFCs, automobile, real estate, and FMCG.
To pull out the economy from the current slump, the finance minister provided tax relief for foreign portfolio investors (FPIs) and startups coupled with targeted steps for the automobile sector and upfront support of Rs 70,000 crore to public sector banks aim to revive demand conditions.
Goyal said decisions of the Cabinet on Wednesday are aimed to “liberalize and simplify the FDI policy to provide ease of doing business in the country, leading to larger FDI inflows and thereby contributing to the growth of investment, income and employment”.
FDI is a major driver of economic growth and a source of non-debt finance for the economic development of the country. The government has put in place an investor-friendly policy on FDI, under which investment up to 100% is permitted on the automatic route in most sectors/ activities.
These reforms have led to total FDI into India reaching USD 286 billion in five years from 2014-15 to 2018-19 as compared to USD 189 billion in the previous 5-years, he said. At USD 64.37 billion, FDI in 2018-19 is the highest ever investment received for any financial year. (PTI)

Trump visits historic church that was set on fire by protestors

19 killed in landslides in Assam