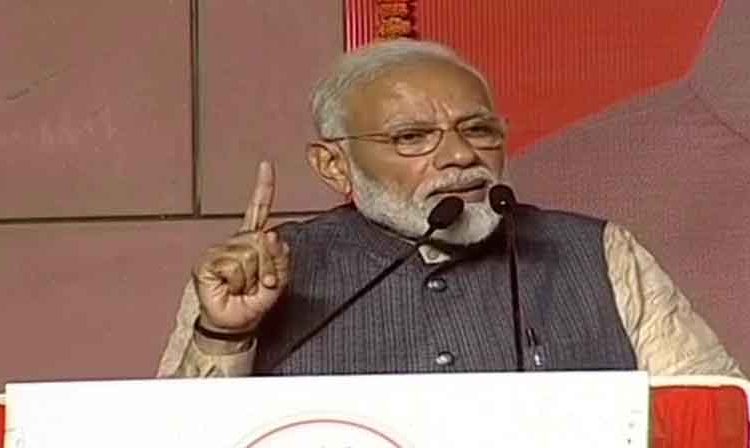 New Delhi, May 23: In his victory speech after securing a massive mandate for a second consecutive term, Prime Minister narendra Modi on Thursday promised that he will not do anything with “bad intentions” or “thinking” and would do nothing for himself.
Addressing a huge gathering of cheering BJP workers at party headquarters amidst drizzle, he also said that this was one election after so many years that the BJP’s rivals dared not “wear the mask of secularism”.
Referring to the huge mandate that party has got, Modi said, “We have come back with full majority. This shows the people’s belief in us. I thank everybody from party president to workers for their hardwork. The NDA leaders also supported us for the last five years. They also worked very hard.”
“I promise you that I am going to deliver whatever you expect from us. We will never disappoint you. But I assure you all that I will work hard to deliver all the promises and I am saying this in public. In coming days, I will not do anything with bad intentions or thinking. There can be mistakes while doing work but nothing will be done with bad intentions or bad thinking.”
In a veiled attack on Congress and other rivals without taking their names, the Prime Minister said that for 30 years there was a drama going on for very long. “There was such a tag which was in fashion wearing which all sins would get washed. That fake tag was called secularism. Slogans would be raised for the unity of secular people. But you would have witnessed that from 2014 – 2019 that whole bunch stopped speaking.”
“In this elections not even a single political party could dare to mislead the country by wearing the mask of secularism,” he said.
“All political pundits have to get rid of all the 20th century thinking,” he added
Thankiing the people for voting his government back to power for a second consecutive term, Modi pledged to make the nation strong by 2022, before the country completes 75 years of Independence.
“For next five years, every Indian will have to pledge to transform India into a strong nation. The mission will require the same spirit as the one witnessed during the freedom struggle. We can make India a strong nation by 2022, before we complete 75 years of Independence,” he said.
“Today, even the rain gods are among us to celebrate,” Modi said rains lashed the city for a while before he spoke,
“Today, the citizens of India have filled the “fakir ki jholi” (the bag of a mendicant). I thank the 130 crores of Indian citizens by bowing before them.”
Modi asserted that now the entire world will have to sit and take notice of India’s democratic powers.
“Since the country got independence, so many elections took place, but 2019 Lok Sabha election were historic as it registered the highest voter turnout despite 40-42 degree Celsius like soaring temperatures. It is a testimonial to voter awareness and people’s dedication to the democratic process. The entire world will have to now sit and take notice of India’s democratic powers,” he said while addressing the scores of supporters present in the headquarters to celebrate the victory with the party’s leadership.
Congratulating all winners irrespective of their party and region, Modi said, “If someone has won, it’s Hindustan (India) that has won, it is democracy that has won, it is public that has won, and therefore, all BJP and NDA people with humility dedicate this victory to public. I congratulate all the winners, no matter from which party or which region they contested.”
Drawing an example from Hindu mythology ‘Mahabharata’, Modi said, “In Lok Sabha elections, 130 crore Indians today stood up for India, just like Sri Krishna stood for humanity in Mahabharata.”
Just like Lord Krishna said he was on the side of Hastinapur in the battle of Mahabharata, 130 crore Indians have said today, they are on the side of India.
He maintained, “I know that every single BJP worker stands for only, only and only ‘Bharat Mata Ki Jai’.”
The Prime Minister also promised all states that the Centre will stand shoulder to shoulder in their journey of progress.
Modi, who will become the first non-Congressman to come to power for the second consecutive term with full majority on his own, said, “Today there are only two castes in India- the poor and the other are those who want to help the poor come out of poverty.”
Modi and Shah together waved to the cheering supporters showing the victory sign as they walked into the BJP office. The workers greeted duo by showering rose petals on them from the top of the building.
Before addressing cadres present in the party’s headquarters, Modi and BJP president Amit Shah paid floral tribute to BJP stalwarts Shyama Prasad Mukherjee and Deen Dayal Upadhyaya.
Top BJP leadership like Rajnath Singh, Sushma Swaraj, J P Nadda, Shivraj Singh Chouhan, Piyush Goyal and Thawar Chand Gehlot were present in the event. (ANI)