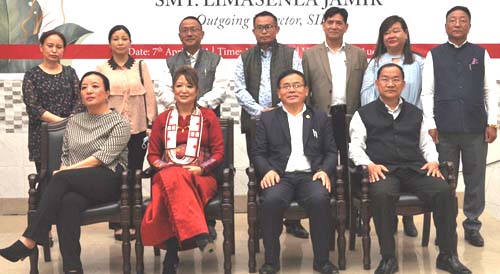 Dimapur, April 7: A farewell programme for retiring Director, State Institute of Rural Development (SIRD), Limasenla Jamir was held at SIRD auditorium, Kohima on April 7. Limasenla Jamir retired after having served as the Director of SIRD for 19 long years, according to a DIPR report.

Advisor for SIRD, Fire & Emergency Services and Relief & Rehabilitation, Pohwang Konyak thanked the outgoing Director for her service and dedication for such a long period of time. Adding that the day of appointment and retiring day are two important landmarks, he remarked that it is an achievement to retire in good health.
Commissioner & Secretary, Rural Development, Neposo Theluo described the outgoing Director as a humble, kind-hearted and an efficient officer who was ever ready to render her service whenever required. He remarked that under her leadership, many infrastructure works have been carried out in the department including the new administrative building, the department auditorium, VIP Guest House etc. She also helped in implementing many innovative schemes, conducted many researches and trainings.
Neposo mentioned that Nagaland SIRD is one of the best in the Northeast, adding that all these were because of the efforts and right initiatives put in by the outgoing Director.
Additional Director & HoD, SIRD, Vesato called the outgoing Director as one of the most decorated and successful Directors of SIRD, and congratulated her for the 19 years of illustrious leadership. He stated that she took on the role of a mother, channelizing all her efforts and hard work to the department.
It may be mentioned that in the year 2019, SIRD secured the third position in the category of ‘Overall Performance in respect to Training Programmes,’ under the Ministry of Rural Development, Government of India. Under her dynamic leadership, despite limited manpower, the department could also accelerate activities in the district headquarters by creating infrastructure assets for the use of rural and general public.
Limasenla Jamir thanked the Almighty for the 35 years of service without facing any insurmountable hardships. She also thanked her family for all the support without which she could not have made it so far.
She joined service as an EAC in 1986, was deputed to ATI, and joined SIRD in September 2002. She said that together with her officers and staff, they could build up a fair amount of infrastructure and challenged them to carry forward the department and make it known as a centre of excellence with expert trainers. She thanked her officers and staff for all the love, care and support she received in her 19 years of service in the department, and also thanked the higher authorities for allowing her to run the department with minimal interference.
(Page News Service)

Relaxation of qualifying years of service for promotion as HoD