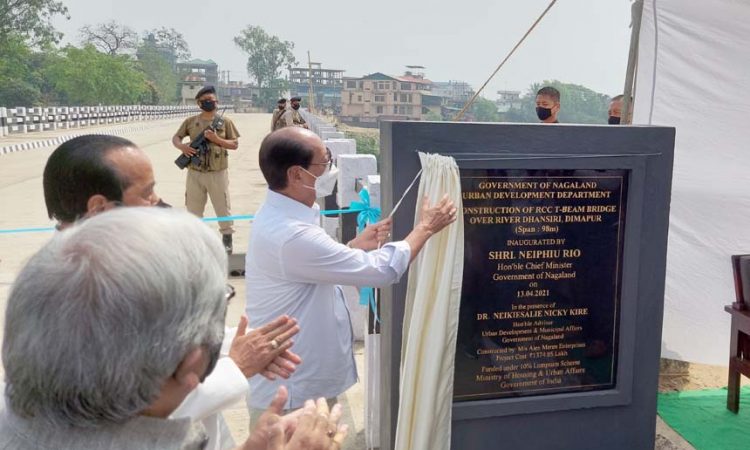 Delay in works caused an enhancement of Rs 3.98 crore: Rio

Speaking on the occasion, Rio said the bridge, which was sanctioned at an estimated cost of Rs 9.81 crore in 2009 was finally constructed at Rs 13.74 crore, an enhancement of Rs 3.98 crore due to delay in construction works. He lamented that to complete the said bridge the process took about 11 years.
He said the Principal Secretary and the Chief Engineer have “justified” that the working period was only about 2 years.

While congratulating the Department, Contractor and the Engineers, the Chief Minister reminded about the importance of road connectivity and said, “without bridge you cannot function, you cannot cross, and in the middle of the most busiest town, the commercial city of Dimapur, if you take about 11 years to complete the bridge, we can imagine the hardship and the harassments of the citizens of Dimapur”.
He also questioned the Department, the officers or the Engineers, stating that 6 years was wasted because of ‘hurriedness and not following the formalities’. He said the work order was issued hurriedly and learnt that it was not properly done and when 6 years was over, enhancement issue came and lots of time was taken.
He urged the Engineers to be sincere and dedicated in whatever they do, follow the rules and procedures, and show transparency so that implementation will not take any effect. In future you see that you follow that, he stressed.
On the issues of encroachments and difficulties faced by the people raised by GB of East Dimapur, Rio said, “We as Christian society, we are fighting for land by hook or by crook as if we will live on this earth forever and ever, and I think this attitude has to go.” He urged the people to acquire in the right way and not disturb the harmony of the community or the society.
Citing the instance of major encroachment in Dimapur, Rio said he had seen serious encroachment at Agri Expo, Dimapur, which was all encroached and land pattas issued. He said the Government took the land back and made the present Agri Expo site, “not for ourselves but for the Northeast and the younger generations to come.” He said it was done because agriculture is Nagaland’s strength and the State has huge potentials.
Stating that the Government took possession of the land, the Chief Minister hoped that it would be an eye opener for everyone.
Talking about another major encroachment, Rio stated that encroachment of the only airport in the State has stopped further development. He said the runway of the present Dimapur Airport is only 2.3 km, which is very short for big aircraft to land and every time one flies, it involves a risk.
“If you want to expand the airport, that is not possible as the land has been forcibly occupied,” he said.
He said after realizing that it was encroached, the Government went to Court and won the case, but unfortunately, certain landowners also went to Court and got a stay order.
Stating that some individuals enjoy more than the peoples’ interest as a whole, Rio said collectively not only the Government but the community has to come out to protect government properties.
Expressing happiness that the Dhansiri Bridge has been inaugurated, the Chief Minister said it would ease traffic and save lots of time and will boost economic activities.
Stating that it would be only one-way traffic, he said public has to follow the directions and regulations.
He also congratulated the citizens of Dimapur and further urged them to fully utilise the bridge, at the same time assist the administration and police for smooth functioning and maintenance of the bridge.
Stressing on quality work for roads and bridges, Rio said road is the face of the State.
“Let us work as a team, anything we do, do it on time and do quality job so that it does not become a liability but an asset,” he further said.
Chief Engineer, PWD (H) & in-charge OF Urban Engineering Wing, Yanbemo Lotha in his technical report stated that the project was sanctioned in March 2009 under Lump sum Scheme for an amount of Rs 981.36 lakh under the Ministry of Housing and Urban Affairs, GOI. However, due to objection raised by the BRO on non-issuance of no objection certificate from the Ministry, the project got stalled for almost 5 years, he said.

He further mentioned that due to delay in work, the contractor requested to relook into the original estimate stating his inability to carry out the work as per original agreed price for which the department revised it from Rs 981.36 to Rs 1374.85 lakh after which the work started in January 2018 and completed within 2 years, which the engineer termed as one of the “most economical bridges of similar kind” built in Nagaland.
Short speeches were also delivered by Advisor for Urban Development & Municipal Affairs, Dr. Neikiesalie Kire and President of East Dimapur GB Union, Niuto Awomi
Programme was chaired by Principal Secretary, Urban Development & Municipal Affairs, I Himato Zhimomi while vote of thanks was delivered by Director, Urban Development, S Takutoba Aier. (Page News Service)