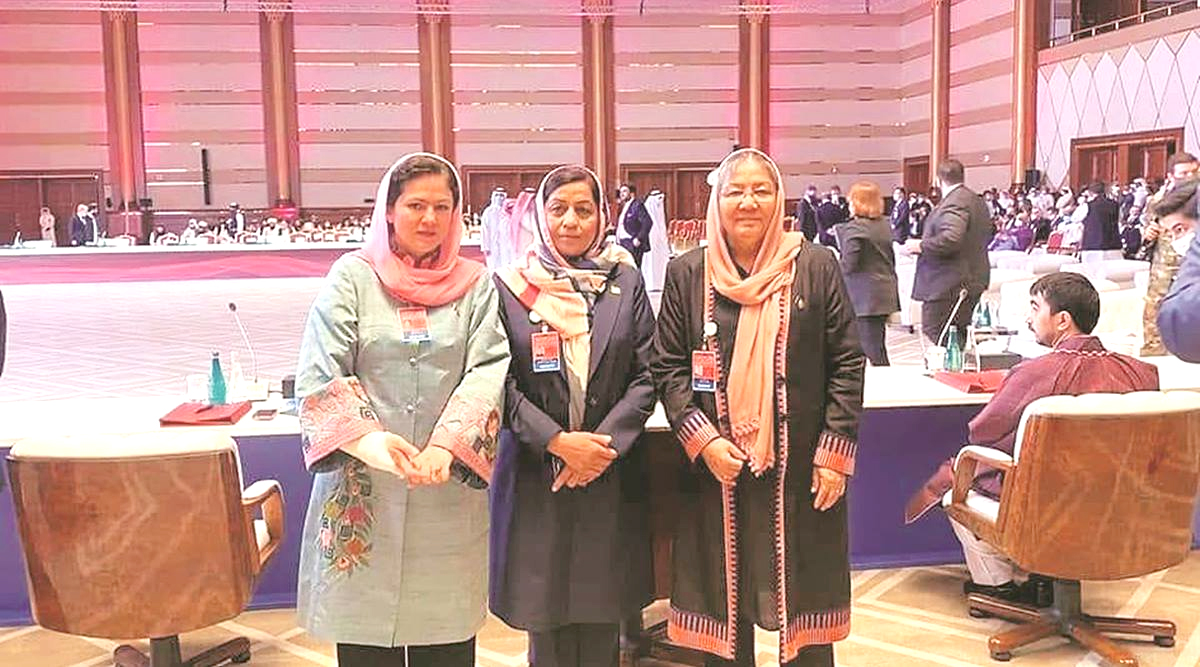 LUDHIANA, SEPTEMBER 17: They faced the threat of mutilation for wearing nail polish or lipstick. They were publicly flogged for violating the dress code. They were barred from stepping out of home without a male companion. They were denied education.
Today, the 3 women in the Afghan Government’s 21-member team that is holding peace talks with an all-male Taliban delegation in Qatar’s Doha have drawn the line for any roadmap that emerges: “We are here to tell the Taliban that it has to face, respect and accept the new Afghanistan.”
“We aren’t reading from any book, but speaking from what we have experienced; what we, the women, have lived under Taliban rule from 1996 to 2001. We faced systematic discrimination, when women were not treated as humans. A girl could not go to school, our clothes were controlled, a woman could not even visit a doctor without a male companion. But now, the Taliban has to understand that things have changed,” says Fawzia Koofi, a lawmaker from Badakhshan province who is also the Deputy Speaker in Parliament.
The 45-year-old is among the 3 women at the peace talks that started on September 12, along with Habiba Sarabi, a former Minister and Teacher, and Sharifa Zurmati, a former Journalist. A 4th member, Fatima Gailani, who is the former President of Afghan Red Crescent Society, is expected to join the delegation soon after her arrival was delayed due to health reasons.
Speaking to The Indian Express on phone from Doha, Koofi says she recently survived an assassination attempt when a gunman opened fire at her vehicle on August 15, injuring her arm.
“Be it pre-Taliban, Taliban or post-Taliban, women in Afghanistan have been through a lot. But it has only given us more strength to speak up. We are fighting for a country where everyone will have the right to cast their vote regardless of their gender, religion, sect, etc. Women’s rights and issues have to be included everywhere, they cannot be segregated,” she says about her expectations from the crucial summit.
Koofi had set up a home school for girls during the Taliban regime and later was the face behind ‘Back to School’ campaign for girls in 2001.
“Peace talks are almost always a complicated process across the world. Here, it is more so because there is the Taliban. We are carrying a double responsibility on our shoulders. We are representing not only women but also our country. We have to preserve our democracy without which peace cannot happen. And democracy will find its meaning only if we include all citizens and ensure their voices are equally heard,” she says.
Sarabi, 64, says she taught girls and immigrant women in Pakistani camps during the Taliban regime after her own daughter was stopped from attending school.
“I want to forget those horrifying times of how women lived under the Taliban, but some things in life are impossible to forget. We had no rights, we could not go out without mahram (male companion). My daughter was in Grade 5 when her schooling was stopped. And it was for her education that I moved to Pakistan. I had to leave my beloved country because Taliban stopped my daughter’s schooling. Today, she holds 3 degrees from Germany, US and India, has worked for Afghanistan’s Finance Ministry and is now with the UN. This is the girl the Taliban had stopped,” says Sarabi, adding that she returned to Afghanistan after the Taliban were ousted and set up a school.
But having once headed the Ministry of Women’s Affairs, she knows that change is easier said than done. “An all-male delegation has come from their side which shows their mentality has not changed. Some of them do not even like to talk to women. They have to change. We can start from Islam. They have wrongly interpreted Islamic texts and implemented them as anti-women. But they cannot ignore us anymore. Right now, we are only 3 in number here, but no aspect is discussed without our involvement. The Taliban has to accept and respect the new Afghanistan. They have to give equal rights to women, in fact to every citizen of our country in all aspects,” says Sarabi.
Former Advisor and Spokesperson of the Ministry of Women’s Affairs, Radio Journalist and Broadcaster from Paktia province, Sharifa Zurmati says they won’t allow a repeat of the atrocities that took place under the Taliban.
“I am not alone in this struggle. I can’t even speak English but I am here to fight for our women. How women lived during the Taliban, we haven’t forgotten anything, but we won’t let them repeat it,” says the 52-year-old who has studied Pashto literature.
“The unending war has killed many men but the worst sufferers are the women left behind. We have to preserve what we have achieved in the past 2 decades. For Afghan women, education, employment and freedom in every aspect have been hard-earned. We won’t lose what we have gained after so much struggle. Our dream is a durable ceasefire, and dignified and sustainable peace in the Islamic Republic of Afghanistan, which is about its people.”
Sharifa Zurmati spoke to The Indian Express in Pashto and a translator helped transcribe the interview (Courtesy: IE)