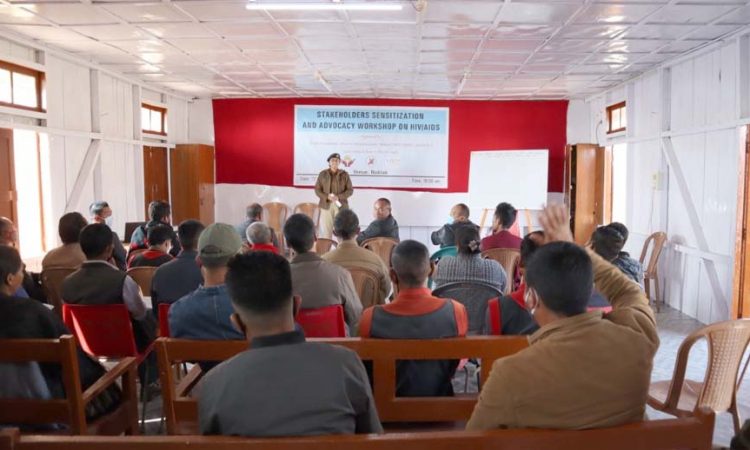 Tuensang, January 24: Stakeholders sensitization and advocacy workshop on HIV/AIDS held on January 22 at DC Conference Hall, Noklak, on the theme ‘ fight against HIV/AIDS & Drugs still on’.

Speaking on the occasion, Superintendent of Police, Noklak, Dr. Pritpal Kaur, IPS stated that Noklak being frontier district should work hard in every field and talent where they can lead from frontline but tackling healthcare should be priority.
She said that problem of HIV-AIDS and drugs are biggest challenge for youth for which every stakeholder should work hand in hand. Police will take measures against drugs menace by checking supply routes , peddlers etc and simultaneously will do efforts to spread awareness amongst youth for pursuing their careers instead of drugs, she assured adding, no discrimination can be done in any job because of HIV AIDS as per HIV act 2017.
Deputy Commissioner, Noklak, Reny Wilfred, IAS in his closing remarks said that cooperation of all stakeholders is crucial for HIV AIDS and drugs menace. He asked all the departments to work effectively along with medical department. He congratulated everyone on district inauguration and motivated to work toward development.
State Co-ordinator ITECH, North East Technical Support Unit NACO, Khyuchamo P.Ezung spoke on HIV scenario and Response in Nagaland with special focus in Noklak giving his own testimony for drugs abuse. He stated that they will try coordinate teleservices and have satellite OST centers in the district.
Director, Kripa foundation, Nagaland, Abou Mere spoke on HIV/AIDS Acts 2017, NDPS Act and Harm reduction. He explained various sections of the law and explained that along with HIV AIDS and drugs abuse, it is necessary to keep a check on KFT, LFT and Hepatitis C also.
He stated Section 64 and 39 of NDPS act should be used to help drug addicts to get back for their normal lives. He also stated that PLHIV cannot be denied any assignment or job because of their HIV positive status and no one can force anyone to get test done without one’s own consent except written in laws.
In open discussions, Khiamniungan Tribal Council President, Thangou stressed on the need of fully functional ART center in the district as its difficult for villagers to come out from far flung village and travel to Tuensang for first 6 months medicine for HIV AIDS.
Khiamniungan Menyu Hoikam president, Newkhoi also stated that traveling to another district for medicines of HIV AIDS patients become economic burden hence ART center should be working at Noklak itself with proper diagnostics and medical teams.
Dr. Chongnya from medical department told about inhibitions by the PLHIV to take medicines because of stigma and lack of awareness.
KBCA-TI project person, Samuel stated that church was doing and will keep doing work in this field with everyone’s cooperation. From Red Cross society Noklak, Lachumong asked for the regular awareness campaigns at level of schools.
KSU and TSU member stated that youth needs to be engaged in career enhancing activities than drugs or other substance abuse.
ARK foundation president, Ketho angami asked everyone to work in coordination for which HIV AIDS and drug addiction can be tackled. He asked to tackle this menace with compassion and tactics.

Earlier, the programme was chaired by SI Mongthei Khiamniungan, welcome address was delivered by President Khiamniungan Menyiu Hoikam, Newkhai. Invocation was pronounced by Chaplin Muno, Police Baptist Fellowship, Noklak and vote of thanks was said by project manager TI project, Noklak, J Khumong who also stated that many deaths are happening because of this hence an assertive and coordinated approach is need of hour.
The workshop was being organised by Kripa foundation, District adminstration, Noklak Police and NSACS with the support from I-TECH, India.
(Page News Service)