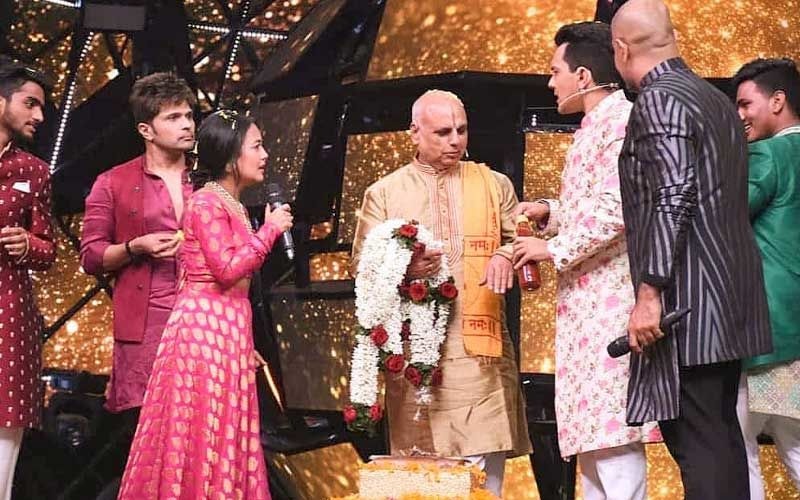 A new viral video of singer Neha Kakkar and Aditya Narayan gearing up to exchange garlands and take pheras on the sets of Indian Idol has surfaced online. But Aditya has dismissed their wedding rumours, saying what is done on the show, remains to the show only.
The video shows Neha, dressed in a red anarkali, and Aditya, in a pink sherwani, facing each other. Aditya picks up two garlands in his hand as he approaches Neha to take one from him. Vishal Dadlani, who is one of the judges on the show along with Neha, can also be seen standing among the guests ready to witness the ceremony.
Aditya, however, dismissed his wedding rumours, claiming that neither him nor Neha has announced their marriage on social media. He told IBTimes in an interview, “If I am going to take such a big decision about my life, don’t you think I will be announcing it myself? I mean getting married is definitely a big news to anyone and something that one wouldn’t want to hide. The truth is that, something which began for fun became too serious and went out of our control. There is a lot happening on social media and this is all fake. Also, no media person has tried to approach us to know whether the news about our wedding is true or just a rumour. If they did, I would have revealed the truth long back.”
He added, “When you watch two actors getting married on screen, you cannot expect them to have babies in real life. So whatever is happening, it is on screen, as a part of the reality show. We do what the makers of the show ask us to do and that is for fun. All that happens for the TRP of the show.”
Neha and Aditya have featured in a new music video titled Goa Beach, which releases on Valentine’s Day. Neha had earlier shared pictures with Aditya and singer Tony Kakkar from Goa where they shot the song.
Aditya is all set to make his digital debut with singing show, LIV Shout-Out. He will host the eight-episode series set to premiere on Valentine’s Day on SonyLIV. Fresh talents from Indian Idol will redefine evergreen Bollywood hits on the show.

Eternally connected, to infinity and beyond: Rhea Chkraborty on Sushant Singh Rajput

Centre announces guidelines for number of online sessions by schools, recommends cap on duration of screen time for students