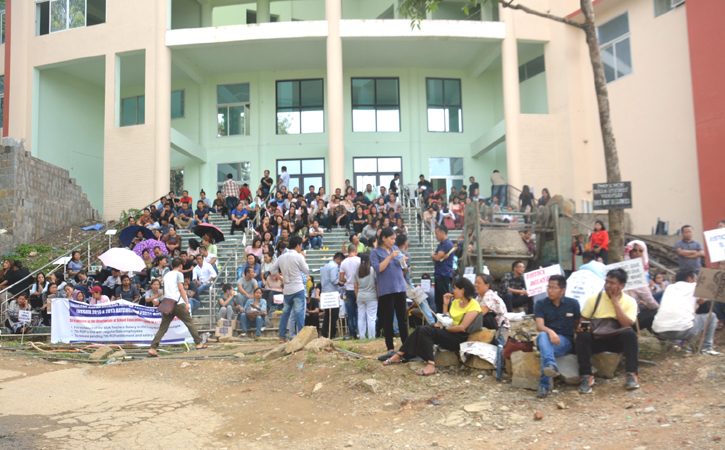 ohima, June 29: Irked at not receiving any positive response from the state Government and the Department of School Education, the All Nagaland Ad hoc Teachers Group (ANATG)-2015 batch on the 10th day of its agitation launched indefinite hunger strike from Friday.
The ANATG-2015 batch has been staging peaceful sit-in-protest since June 18 last outside the Directorate of School Education here demanding service regularization of 1166 ad hoc teachers appointed till December 2012 in the State.
ANATG-2015 batch spokesperson, Bendang Ozukum said that while several rounds of meetings and discussions have been held with Education Department officials, including the Principal Secretary to Government of Nagaland, to resolve the issue since the start of the agitation but all have been inconclusive.
He said that a meeting between the State Cabinet committee, headed by Minister for PWD, Tongpang Ozukum, and the representatives of agitating ad hoc teachers held Thursday in presence of Advisor for School Education, KT Sukhalu and Principal Secretary failed to come to a conclusion.
Irked over the lackadaisical attitude of the Government and Department, the ad hoc teachers have been left with no option but to sit on hunger strike from today, he said.
ANATG-2015 batch officials also affirmed that the hunger strike would continue unless their sole demand is fulfilled and that they would not accept anything less than service regularization.

“Around 70 ad hoc teacher volunteers representing every district of the state are sitting on hunger strike till our sole demand of service regularization is fulfilled by the Government. We will continue the strike even through the weekend,” ANATG spokesperson informed.
On the first day of the hunger strike, a female volunteer lost consciousness and was rushed to hospital for treatment. She is said to be stable now.
Meanwhile, ANATG-2015 batch served an ultimatum to the Principal Director of School Education, superseding erstwhile ultimatums, demanding that the Government and the Department immediately file an Interlocutory Application before the Court and redress their grievances without further ‘unjust delays’.
The ultimatum signed by ANATG-2015 Batch president Ruguotsolie and convenor Temsuchiba Aier demanded that the Government should bring out separate one-time special office memorandum particularly for the ANATG-2015 Batch by referring the official notification of the P&AR Department vide order dated August 30, 2011 and immediately regularize their service.
“Regularize the service of ANTG-2015 batch through any other available options which are at the Government’s power and discretion,” they demanded.
The group said that failure on the part of the Department/Government to fulfil any of the above 3 demands would compel them not to suspend nor call off the indefinite hunger strike, which started today.
They also cautioned that the Department and Government would be solely held responsible for any unwarranted situations.
(Page News Service)